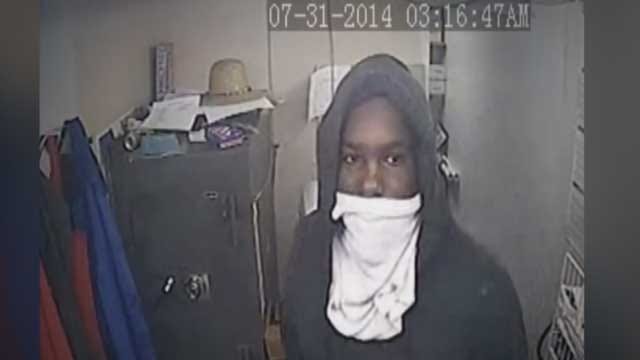 The search is on for three men accused of going on a crime spree across Oklahoma City.

Police say three businesses have been targeted in just the past week. Two of those business burglaries happened on the same morning, less than an hour apart.

Oklahoma City police want you to take a good look at the suspect in the surveillance footage. Police say he and two other men are responsible for three brazen business burglaries.

All three were caught on camera.

“All three of the cases has had the same number of suspects, dressed the same way, similar way that they go into the business and what they’re taking,” Sgt. Jennifer Wardlow said.

In each case, the men are wearing black hoodies and white gloves with white bandanas over their faces.

It's 3:16 a.m. in the surveillance footage. You can clearly see two of the suspects walk into the business office at the Warehouse Market on S.E. 59th.

Police say the crow bar in the suspect's left hand was used to pry open the front door and an ATM. At least $1,000 dollars was taken.

“The entire machine, all three suspects drag it out of the door,” Sgt. Wardlow said.

That same morning, about an hour before the Warehouse Market heist, the men hit La Michoachicna Meat Market on S.W. 29th.

There, police say the lock and chain from the front door had been pried open, again by a crow bar.

The business office inside was ransacked, and more than $2,000 was taken from a small safe.

On Wednesday afternoon, police believe the same three broke into the Michael Kors outlet store off I-40. More than $21,000 worth of merchandise was stolen.

If have any information about these burglaries, or if you recognize the suspect in the surveillance video, call Crime Stoppers at 405-235-7300.