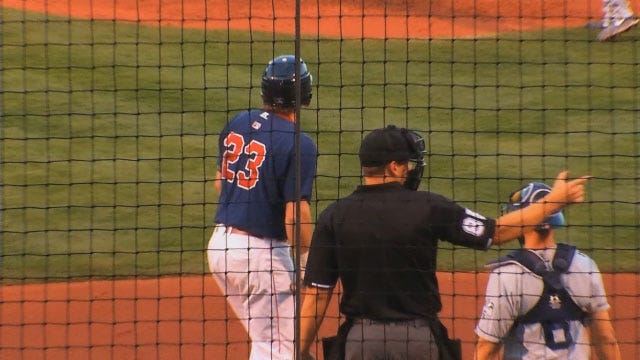 The Oklahoma City RedHawks built a quick seven-run lead and went on to a 16-4 win against the Iowa Cubs Thursday in front of a crowd of 5,064 at Chickasaw Bricktown Ballpark.

The RedHawks (61-59) compiled a 7-0 lead in the second inning as they took the first game of a pivotal five-game series against the American Northern Division leading Iowa Cubs (63-57). Oklahoma City now trails Iowa by two games in the standings.

Oklahoma City set a season high for runs scored and won a fifth consecutive game to tie its longest winning streak of the season.

Preston Tucker drove in four runs and connected on three hits, including a two-run homer, for the RedHawks. Ronny Torreyes had a game-high four hits for Oklahoma City and scored four runs.

The RedHawks took a 5-0 lead in the first inning.

Jonathan Villar led off the bottom of the frame by drawing a walk and Joe Sclafani hit a RBI double to left field to put the RedHawks ahead, 1-0.

Torreyes followed with a hit before Tucker connected on a RBI single for a 2-0 RedHawks lead.

Matt Duffy singled to left field to load the bases for Andrew Aplin, who doubled to drive in two more runs for Oklahoma City.

Carlos Perez followed with a sacrifice fly to give the RedHawks a five-run advantage.

The RedHawks added two more runs in the bottom of the second inning.

Tucker picked up his second RBI in as many innings, bringing home Villar with a one-out single.

Duffy followed with a sacrifice fly for a 7-0 Oklahoma City advantage.

Manny Ramirez belted his second home run of the season with Iowa, a two-run homer, to center field to cut the RedHawks lead to 7-2 in the fourth inning.

Villar got the runs back for the RedHawks in the fifth inning, hitting a two-run single on a grounder to center field for a 9-2 lead. He finished the night with two hits and three RBI.

Iowa's Kris Bryant then hit an opposite field two-run homer over the tall wall in right field to cut the RedHawks lead to 9-4 in the top of the sixth inning.

A RBI single by Max Stassi, a RBI double by Ruben Sosa and a sac fly by Villar put Oklahoma City ahead, 12-4, in the bottom of the frame.

In the seventh inning, a sac fly by Duffy gave the RedHawks a 13-4 edge.

Torreyes hit a RBI single and Tucker connected on a two-run homer to right-center field to put the RedHawks in front, 16-4, in the eighth.

The RedHawks outhit Iowa, 19-5, and posted their highest run total since defeating Colorado Springs, 24-5, Aug. 3, 2013. They finished the night hitting 9-for-18 with runners in scoring position.

Rudy Owens (6-5) earned the win on the mound for Oklahoma City, allowing four runs on five hits, including two homers, over six innings. He walked two and struck out six to earn his first home win of 2014.

Pitcher Carlos Pimentel (3-8) was charged with the loss for Iowa. He allowed nine runs on 14 hits over five innings.

The RedHawks continue their five-game series against the Iowa Cubs at 7:05 p.m. Friday at Chickasaw Bricktown Ballpark.