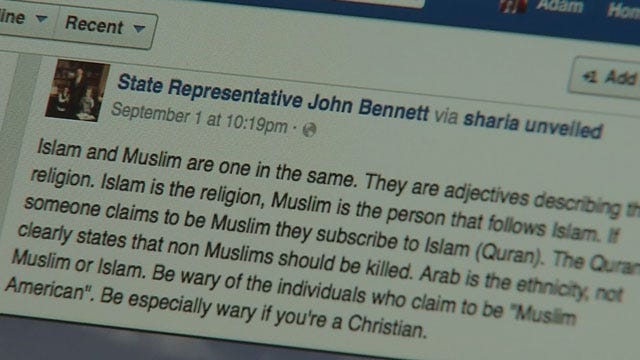 A controversial statement made on Facebook by a state lawmaker has outraged Muslims in Oklahoma.

The Islamic community demanded an apology after a state representative posted on Facebook to be "wary of Muslim Americans" and then shared a link about the ISIS brutality in the Middle East.

"I was really disappointed that someone who is elected to represent the people would put something so negative out there,” said Adam Soltani, CAIR-Oklahoma Executive Director.

CAIR-Oklahoma said it wants Representative Bennett to apologize for his comments.

Bennett's post reads in part, "The Quran clearly states that non-Muslims should be killed... Be wary of the individuals who claim to be 'Muslim American'. Be especially wary if you're a Christian."

“You can take verses out of the Bible or any other holy book out of context. They look good or they look bad depending on how you frame them,” Soltani said. “But the Holy Quran states that you take the life of one innocent person, it's as if you took all of humanity.”

Bennett said he can say what he wants on his private Facebook page and he sticks by his comments. He said it is ironic a group that fights for First Amendment rights is trampling on his first amendment rights.

Bennett also said he is not taking anything out of context because ISIS militants are using the Quran to carry out beheadings in Iraq and Syria and if they aren't stopped, the same will happen here.

CAIR has publicly condemned ISIS and called them an extremist group with ideals that are the antithesis of Islam.

“To tell fellow Oklahomans that they need to be wary of someone like myself, that's concerning and that can only lead to what we fear would be hate crimes and Islamaphobia,” Soltani told News 9.

Soltani said Bennett's idea that religious extremism is wrong is correct, but relating that to Islam in America is absolutely wrong.

Bennett told News 9 he is not advocating violence against anyone, but wants to educate people. He said he will only apologize if CAIR-Oklahoma condemns any Quran teachings that promote violence against non-Muslims.