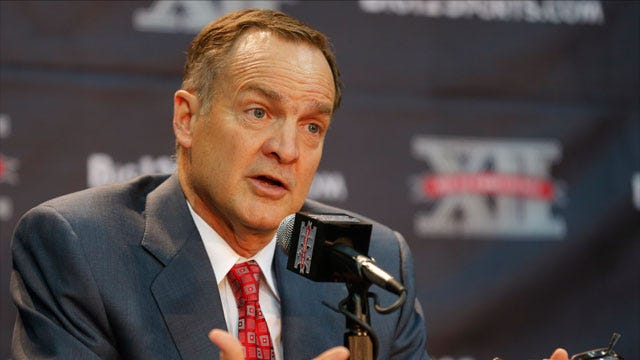 Oklahoma coach Lon Kruger has seen improvement each season at the helm in Norman. Now entering his fourth season, Kruger's goals are higher than ever as he brings back his most experienced team of Sooners.

“The leadership of this group with Ryan (Spangler) and Buddy (Hield) and Isaiah (Cousins) is outstanding,” Kruger told reporters at Big 12 Media Day. “Jordan Woodard, as a sophomore, understands more clearly what Big 12 games are all about and how tough it is.”

The 19th-ranked Sooners return four starters from a team that finished second in the Big 12 and won 23 games a year ago. OU was picked third in the preseason Big 12 poll this year.

Forwards Cam Clark and Tyler Neal are gone and Je'lon Hornbeak transferred but the Sooners return the core of Woodard, Hield, Cousins and Spangler along with 68 percent of last year's points and 77 percent of rebounds.

Hield showed remarkable improvement from his freshman to sophomore years. Now a Big 12 veteran, he'll be a go-to scorer in Kruger's system.

“I thought as a freshman, Buddy was a little bit more aggressive in attacking the rim and going to the offensive boards,” Kruger said. “Last year a little more perimeter oriented and shot the ball and had a good year. I think we'll see him combine the two and attack a little bit more off the dribble and make him more effective in shooting the ball. I think we'll see a more well-rounded game out of Buddy.”

“Jordan had a really good freshman year, but typically they make the biggest jump from freshman to sophomore year.”

Kruger also noted the energy and athleticism of incoming freshmen Khadeem Lattin and Jamuni McNeace, both of whom could crack the rotation in the post.

And they're hoping to get a boost in the paint with incoming transfer forward TaShawn Thomas.

Kruger expects to hear news on Thomas' eligibility soon, but for now it's a waiting game with the NCAA. Thomas averaged 15.4 points, 8.1 rebounds and 2.7 blocks per game for Houston last year, leading the Cougars in each category.

But, again, expectations are as high as they've been since Kruger took over the program, and a deep postseason run is due. The Sooners haven't made it out of the round of 64 in the NCAA tournament since 2009.