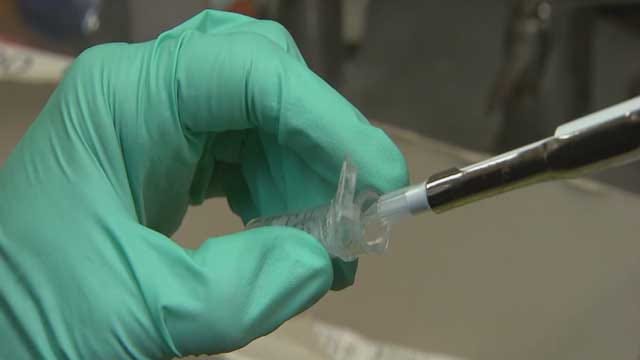 Researchers are racing to develop a vaccine that could help halt the Ebola virus. The one thing slowing the process is money. Pharmaceutical giant Johnson & Johnson is planning to spend tens of millions on the cause.

There are already a handful of Ebola vaccine trials going on in the U.S.

One major issue is pharmaceutical companies don't see a big enough market to develop an Ebola vaccine, but that's not stopping many doctors trying to get ahead of curve.

The idea of vaccines is simple, but creating a vaccine powerful enough to take on the widespread Ebola virus has become a huge undertaking.

"I think that there's a lot of angst about Ebola right now, and I think that any effort to try to arrest the current situation in Africa is very, very important," Dr. David Chansolme, who oversees infection prevention and control for Integris hospitals, said.

Chansolme said, like the flu vaccine, the Ebola vaccine will mimic the virus to help the immune system fight it. For now, Chansolme said Ebola survivor, Dr. Kent Brantly, is a "walking Ebola vaccine" after donating his blood to the two nurses infected and the freelance cameraman.

So, the race for an Ebola vaccine is on.

Johnson & Johnson plans to invest up to $200 million to develop a vaccine.

The National Institutes of Health and a British drugmaker, GlaxoSmithKline, are creating a vaccine from a modified chimpanzee cold virus and Ebola protein.

Another vaccine is being developed by the Public Health Agency of Canada at the Walter Reed Army Institute of Research in Maryland.

Chansolme said it could take months before all the data is in, but it's worth a start.

"Vaccination is a huge part of that effort," said Chansolme. "It won't fix the problem by itself, but it will definitely help, and I think any efforts that we can make to speed vaccine development for this particular illness would be lauded by anyone in the profession.”

Johnson & Johnson plans to begin testing an Ebola vaccine in January and hope to have 250,000 doses available by May.