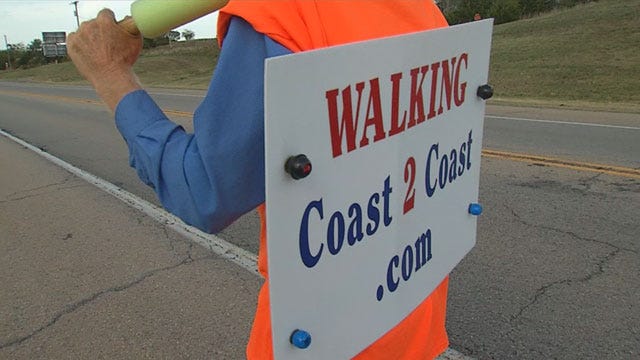 68-year-old Pastor Walter “Chick” McGill from Tennessee said he is walking the 3,200 miles with an American flag.

“I haven't wore out any shoes yet,” said McGill, who has eight pairs for his trip.

Chick said he's calling attention to the 10 commandments and states rights with his journey from the East Coast to West Coast.

Not only was he carrying the American flag, but he also saluted each passing car.

“A lot of people will stop and turn around and come back and say when you saluted me, you moved me,” said McGill, who covers around 15 miles a day and rests on the weekends.

The Vietnam veteran said he was moved by a message for God telling him to cross the country.

“He approached me three times. The first two times I thought I has hallucinating,” said McGill.

McGill's wife drove a car nearby filled with supplies. Both said they hope to arrive in Santa Monica, Calif. in March.

On his stretch through Oklahoma, McGill had company on his walk.

John Contestabile was crossing the country on foot as well.

He was headed the opposite direction than McGill, but will walk west for three days with the pastor before turning around to head to Washington D.C. for National Day of Prayer in May.

“Prayer is the only thing that is going to change the nation,” said Contestabile.