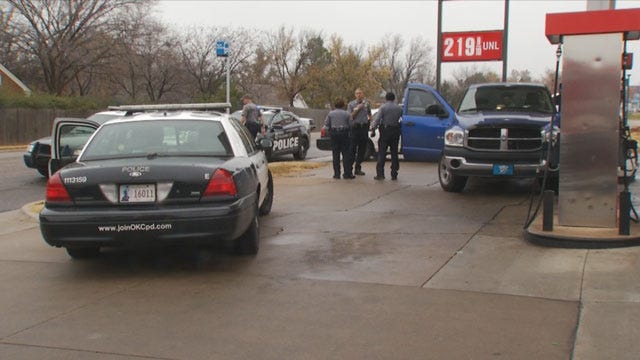 Police in Oklahoma City arrested two teenagers for a crime spree that involved a carjacking and three separate robbery scenes. And they say they are still looking for a third suspect.

Police told News 9 the three suspects used a Batman mask, a Captain America mask and a gun during their crime spree. That spree came to an end when an alert Oklahoma City officer spotted the stolen truck.

The 7-11 at Western Ave. and NW 71st Pl. is where police found those two people, and took them in for questioning.

Police said it was an officer with their gang unit that spotted the stolen blue Dodge Ram truck and called for backup. Inside they found a 15-year-old girl and 17-year-old boy, as well as a gun believed to have been used in at least three armed robberies.

Police confirmed the blue Dodge Ram truck matched one that was reported stolen from the Belle Isle Wal-Mart during a carjacking Wednesday around 8 p.m. It is also believed to have been used in the attempted robbery of a woman at a convenience store near SW 104th St. and Penn. Ave.

The police report stated the victim was heading back to her car after paying for gas and was hit in the head and face with a gun by one of the three suspects that pulled up behind her.

Police stated those same suspects are wanted for a break-in at a home on North Georgia at 10:30 a.m., and for robbing a person outside Tucker's restaurant in Classen Curve just before 11 a.m. on Thursday.

“So they were able to take the two suspects in custody that way.”

Police have identified those two as 15-year-old Kylee Totsch and 17-year-old Anthony Lawson. They are still looking for the third suspect. He is the one said to have been wearing the Captain America mask during one of the robberies Thursday morning.

News 9 did talk to the woman who was pistol whipped. She did not want to go on camera, but said she is shaken by what happened, but thankful she's alive. She is glad that at least two of the suspects have been caught.