Barons Rally For Win Over Rampage 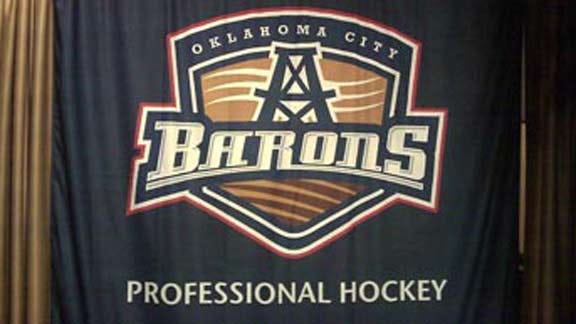 Brandon Davidson scored the game-winning goal in overtime to lift the Oklahoma City Barons to a 2-1 win over the San Antonio Rampage Saturday night at the AT&T Center.

With 1:03 remaining in the overtime period and the teams skating at 3-on-3, Davidson received a pass from Anton Lander near the point and skated to the high San Antonio slot before ripping a slap shot that sailed past Rampage goalie Michael Houser to cap the Barons' third consecutive win. The goal was Davidson's second of the season, with both being overtime winners, and Lander's assist extended his current point streak to five games.

As the Barons trailed 1-0 after two periods on a goal at 18:20 of the second by San Antonio's Brett Olson, Connor Jones knotted the game for Oklahoma City when, on a 3-on-2 rush, he sent a pass to his twin brother Kellen Jones who immediately tipped the puck back to Connor Jones who chipped a shot past Houser to tie the game at 5:37 of the third period. Connor Jones's goal was his first career AHL goal and point.

Oklahoma City goalie Laurent Brossoit stopped 27 shots and improved to 9-4 on the season. Brossoit is 9-1 in his last 10 decisions.

Houser made 37 saves for the Rampage.

The Barons return to action Sunday, Dec. 28, when they face the Charlotte Checkers in a 4 p.m. start at the Cox Convention Center.

Barons Rally For Win Over Rampage