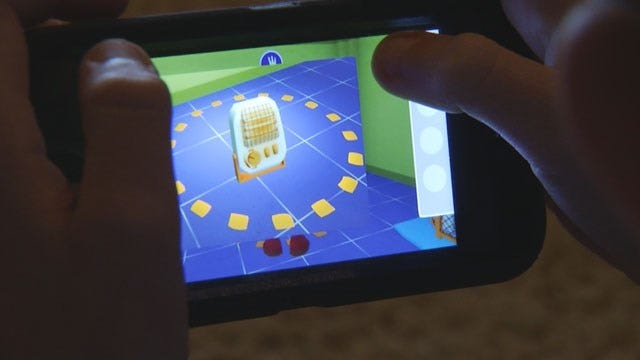 The agency teamed up with Disney to create its first app designed specifically for kids to show them ways to prepare for disasters.

“Kids like to learn through interaction and so what the Monster Guard app was designed to do is be basically be a game,” said Ken Garcia with the Red Cross.

The educational app teaches kids how to prepare for all types of emergencies.

Once a child picks a home state, the game explains the most common emergencies in that area, like tornadoes for Oklahoma.

“You go through different things; house fires, floods, volcanoes. No, it may not happen here, but it'll still teach you in case you travel to parts of the country where there are volcanoes,” explained Garcia.

Garcia said the app is for ages five to about 11.

Kids can pick a character and then the first scenario the game makes them go through a house fire.

“Those are the most common threats that people face, especially this time of year with it being so cold and they'll say, ‘This is smoke detector,' and it makes you test it,” Garcia told News 9.

If the smoke detector does not work, the game makes the kids find batteries and celebrates any successes along the way.

“When you do the right thing, it says, ‘Good job, you're right, you should always put a guard in front of the fire place.'" Garcia said.

The game gets kids interested, gets them asking questions and ultimately prepares them for a future emergency.

“Prepare them for any type of disaster. Not scare them, but to prepare them and to let them know what can happen,” added Garcia.

The Monster Guard app is free and you can download it on iPhones, iPads and Androids.