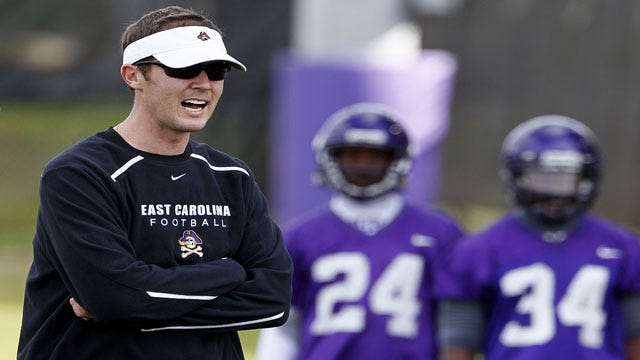 The University of Oklahoma officially announced that it has hired East Carolina's Lincoln Riley as offensive coordinator and quarterbacks coach, as first reported by our Dean Blevins on Sunday.

Riley was the Pirates' offensive coordinator for the past five seasons.

East Carolina ranked third in the nation in passing offense (371.9 yards per game) and was fifth in total offense (533.0 ypg.) in 2014. The Pirates also averaged 35.8 points per game this past season to rank second in the American Athletic Conference.

“Lincoln is also talented recruiter who I'm confident will help attract top-flight talent to the University of Oklahoma. Our student-athletes and our staff will benefit from his skills and passion for the game. We are excited that Lincoln and his family are joining the Sooners.”

Riley's units own the top five spots on ECU's single-season passing list. In addition, his squads hold the top four spots on the school's yearly total offense ledgers, including a record-breaking 6,929-yard season in 2014.

“My family and I are tremendously enthusiastic about the opportunity to join Coach Stoops and the University of Oklahoma,” Riley said. “Oklahoma is one of those programs you dream of working for as a coach, especially for a head coach as respected and as successful as Bob Stoops.

“I know the high expectations that come along with this position, and I'm ready to embrace the challenge. I'm excited to arrive in Norman to build relationships with our student-athletes and get to work with the rest of the coaching staff.”

Riley installed and directed a new up-tempo spread offensive scheme that made an immediate impact upon at East Carolina. The Pirates set over 50 team or individual school offensive records in his five seasons with the program, and he played a key role in ECU's 2013 win over Ohio in the Beef ‘O' Brady's Bowl, the program's first bowl victory since 2007.

Carden then took over the job in 2012 and went on to break the majority of Davis' records, becoming the first 4,000-yard passer in program history and setting single-season standards for completion percentage (70.5) and most total yards (4,736). Carden earned C-USA MVP and the American Conference's Offensive Player of the Year honors during his three seasons as the Pirates' signal caller.

Before his arrival at East Carolina, Riley spent seven total seasons on the Texas Tech staff, working under Mike Leach. Included in his three full-time years of service to the Red Raiders was a one-game role as interim coordinator that helped produce a 41-31 victory over Michigan State in the 2010 Valero Alamo Bowl. As Texas Tech's play-caller against the Spartans, the Red Raiders racked up 579 yards which was the most in the program's bowl history since 1995.

After exclusively coaching the Red Raiders' wide receivers in 2007, Riley spent his last two seasons in Lubbock tutoring the inside receivers and serving as Leach's eyes in the coaching booth on game day. As the program's receivers coach, he worked with Biletnikoff Award winner Michael Crabtree during his record-breaking campaign in 2007.

Riley was a part of seven bowl game appearances and five bowl victories during his time at Texas Tech. Additionally, the offense was very productive during his years assisting the explosive system as Red Raiders quarterbacks won NCAA passing titles in 2003, 2004, 2005 and 2007.

Riley, 31, earned a degree in exercise and sport sciences from Texas Tech in May 2006. He and his wife, Caitlin, are the parents of a daughter, Sloan.