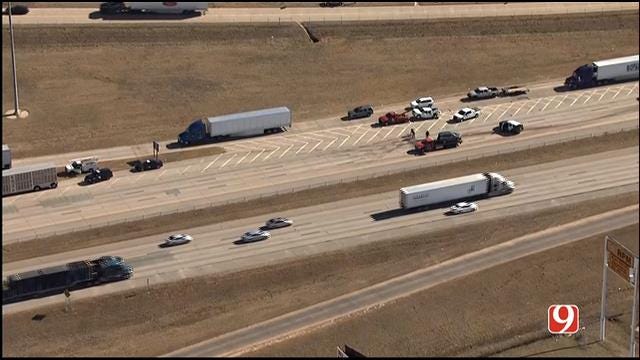 A multi-vehicle collision caused traffic to back up in the northbound lanes of Interstate 35 at Wilshire Blvd. in Oklahoma City, Friday afternoon.

According to the Oklahoma Highway Patrol, at 12:15 p.m., I-35 northbound was shut down at Wilshire Blvd. Traffic was being diverted off onto Wilshire, as crews worked to cleared the scene of the wreck.

Bob Mills SkyNews 9 HD flew over the scene. Pilot Jim Gardner reported that three vehicles were involved in the collision, including a semi-truck. Traffic was backed up in the area.

One person has been transported to Mercy hospital in good condition.

The cause of the collision is under investigation.