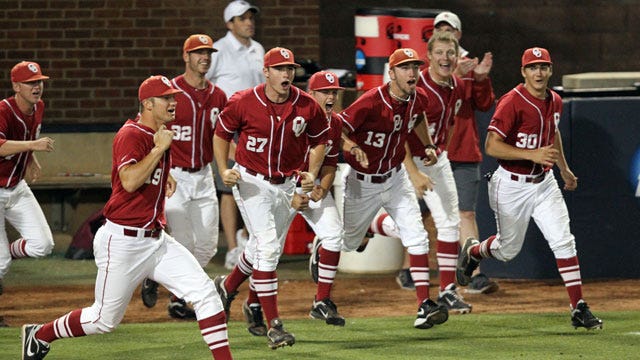 Sophomore right-hander Alec Hansen blew away the opposition with 12 strikeouts as the University of Oklahoma baseball team put together a 9-6 win over Oregon State at Surprise Stadium on Saturday afternoon. The win pushed the Sooners' record to 5-4, while the Beavers dropped to 4-3.

“Oregon State is a perennial power; they're a good team and our guys got caught up in our game plan rather than the atmosphere,” began head coach Pete Hughes. “I thought the atmosphere was really good. I'm proud of our guys for sticking with the game plan, executing and getting runs on the board. I think the more runs you can get for Alec at this stage of his career, the better it is for him and the easier it is for him to settle in and execute pitch-to-pitch.”

In his second start of the season and third of his career, Hansen (1-1) was throwing his fastball consistently in the mid-90s, with several reaching 98 miles per hour. He pitched five innings, allowed five hits and two runs to go with four walks.

“To [Hansen], it's really pitch-to-pitch,” continued Hughes. “He's got to focus on the next pitch. It's the most important. It seems so trivial, but that is where he goes mentally and seems to work for him. Coach [Jamie] Pinzino has done a great job to get him in that mindset and work on the mental part of the game, because we all know how good the stuff is.”

Oregon State got the first two batters of the game aboard with a double and a single. Hansen threw a wild pitch that brought in a run, walked a batter and threw a second wild pitch before recording an out. He began to settle down from there as he struck out three batters and worked around a two-out walk. Hansen recorded all three outs via the strikeout again in the fourth and fifth innings.

Oklahoma's offense came to Hansen's defense in the bottom of the first. Junior center fielder Craig Aikin, in his return to the lead-off spot, walked and came around to score on a triple to right by sophomore shortstop Sheldon Neuse. Junior third baseman Anthony Hermelyn followed with a triple of his own to drive in Neuse and put OU in front. The Sooners would never relinquish the lead and tacked on a third run in the first as Hermelyn came home on a RBI groundout off the bat of sophomore first baseman Austin O'Brien.

Leading 4-2, senior second baseman Joshua Ake reached on a one-out walk and scored on a triple drilled to right by Aikin, who crossed the plate on a sacrifice-fly by redshirt-senior right fielder Taylor Alspaugh.

Oklahoma opened the bottom of the sixth with a Hermelyn single and O'Brien double. Junior left fielder Kolbey Carpenter then lifted the Sooners' fourth triple of the game to the warning track in right to drive in both baserunners. Carpenter scored on a RBI groundout by junior catcher Chris Shaw to push the OU lead to 9-2.

“That's what speed and athleticism does in baseball,” reflected Hughes on his team's improvements from a year ago. “It gets you from first-to-third, it scores you from first on doubles, scores you from second on base hits, it gets you triples and gets you into scoring position. Our major area where we were deficient last year was athleticism and I think we're a much better team in that respect and that was without Alex [Wise] today.”

In the top of the seventh, Oregon State staged a rally by getting the first two runners aboard. Designated hitter Gabe Clark, who struck out three times against Hansen, drilled the first pitch he saw against the Sooner bullpen for a three-run home run to left. The Beavers added one more run in the eighth inning, but Oklahoma turned to Neuse to move to the mound and finish the frame. He struck out two in 1.1 innings to earn his first save of the season.

Neuse went 2-for-4 and Hermelyn 2-for-3 to record multi-hit games. Oregon State outhit the Sooners, 12-8, led by a 4-for-4 day from shortstop Trever Morrison.

Lefty Luke Heimlich (0-1) took the loss for the Beavers in five innings of work. He was tagged for nine runs, eight earned, on eight hits and two walks with two strikeouts.

Oklahoma wraps up a five-game trip to Arizona with a 1:00 pm CT first pitch against Utah in Goodyear on Sunday afternoon.