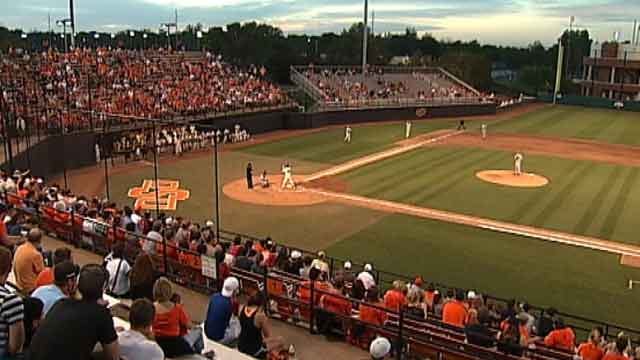 The victory was the fourth in a row for the 10th-ranked Cowboys, who improved to 5-3 on the season. It also marked the 11th-straight year that OSU has won its home opener.

“It was awesome to be back at home – we played a good opponent and played well so that's kind of how you envision it,” said OSU head coach Josh Holliday. “I'm excited about how well we pitched and played defense, and I thought we did a good job late in the game of putting some innings together. I'm encouraged by the improvement we're seeing. And obviously winning games is a by-product of playing well so I'm pleased with that.

“We're focused on getting better, and if we do that I think we've got a chance to have a good team.”

Alex Hackerott earned his first win of the season in a relief role, while Blake Battenfield made his first-career start for the Cowboys and worked four scoreless innings with three strikeouts.

OSU led throughout the contest, plating its first run in the second when David Petrino, who singled earlier in the inning, scored from second on a two-out RBI single by Case.

The score remained 1-0 until the sixth when Holliday's club rallied for three runs. Gage Green led off the inning with a walk and was followed by Conor Costello, who was hit by a pitch. After a strikeout, Arakawa singled up the middle to bring home a run, and Costello made it 3-0 when he scored on a passed ball. Bradley would bring home OSU's third run in the frame on a sacrifice fly.

Missouri State (4-2) scored its only runs in the seventh, cutting its deficit in half on a two-run home run by Jake Burger as he sent a Trey Cobb pitch off the foul pole in right field to make the score 4-2.

But in the bottom of the inning, the Cowboys seized the momentum right back as they tallied three more runs on three hits and a pair of MSU errors.

Hackerott worked two scoreless innings and struck out three to improve to 1-0, while Koda Glover struck out two of the three batters he faced in the ninth to close out the win.

OSU returns to action Friday when they face Western Illinois in the first of three games in Auburn, Ala. The Cowboys will look to extend their winning streak with a pair of games against WIU (on Friday and Sunday) and a contest against Auburn on Saturday.

“We're starting to figure it out and some people are stepping up,” Arakawa said. “It's exciting to see new faces go to the plate and get big hits, make good plays on defense and pitch the ball well.”