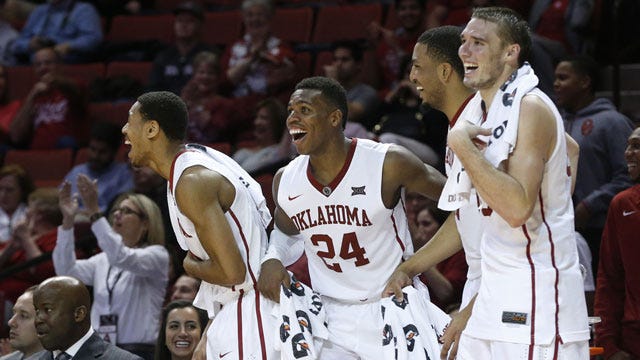 At the end of January, it looked fairly certain Kansas would extend its incredible run of Big 12 regular season championships to 11 straight seasons. Fast forward to the end of February and pretty much anything is a possibility.

The Jayhawks still sit a game ahead of the pack in the Big 12, but the pack is large and hot on Kansas' heels.

Somehow, Oklahoma finds itself right in the middle of the pack, and controls its own destiny to earn a share of the Big 12 title. If the Sooners get a lot of help, the cards may just fall in favor of Oklahoma winning the title alone.

After the Sooners lost at Baylor on Jan. 24, Oklahoma stood just 3-4 in the conference. But the Sooners had weathered a brutal start to conference play, where six of their first seven opponents were ranked, and four of them were on the road.

Since then, Oklahoma has taken advantage of the more favorable schedule, winning seven of its last eight games, just two of those against ranked opponents. Still, things haven't been perfect for the Sooners during that run. Kansas State's sweep of the Sooners remains one of the more baffling results in college basketball this year, and in the past two games, OU has had tougher-than-expected clashes with Texas and Texas Tech.

So what does Oklahoma have to do to bring home its first regular season title since 2005, the Sooners' only other Big 12 regular season title? It's quite simple: win out and the Sooners get a trophy, finishing the year at 13-5 in the conference. But let's take a look at the remaining schedule and see what has to happen for OU to somehow come away with a solo title.

Oklahoma has to win out if a solo title is even possible. So that would make the winning record 13-5. Iowa State would get six losses by just losing to Oklahoma. Kansas obviously has to lose twice, but only has one road game. It's very difficult to win at Allen Field House, but that's what Texas or West Virginia would have to do to help the Sooners.

The wild card here is the Mountaineers. If they manage to win at Kansas, that's easily their toughest game of their final three. Winning at Baylor won't be easy, though, and the Bears already have six conference losses, so they're already on the outside looking in. Baylor could provide the Sooners with the extra help OU would need.

Obviously, this is simply an exercise to show all possibilities. Winning the Big 12 regular season title has no bearing on how things will shake out in the NCAA tournament, or even the Big 12 tournament. Still, it's been a long time since OU won a regular season Big 12 title and the path to another one is very clear for the Sooners.