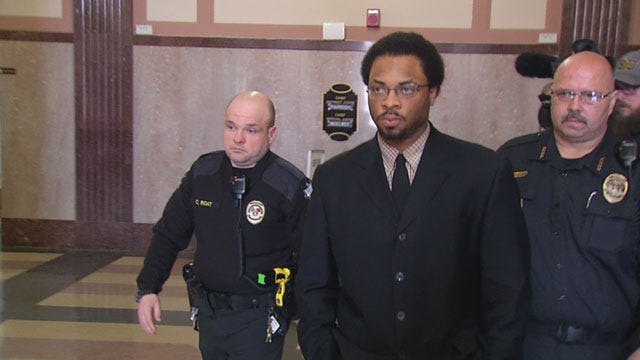 An Oklahoma City jury has recommended the death penalty against 25-year-old Isaiah Tryon, the man charged with stabbing a woman to death at the downtown bus station in March 2012.

It took the jury about an hour and a half to reach their verdict.

News 9 is told that jurors agreed that Tryon performed the murder after serving time for a former felony conviction, and posed a danger to the public because the act was particularly heinous

The jury began deliberations just before 4 p.m. after hearing tearful testimony from both Tryon's brother and his defense attorney, as well as a passionate closing argument from the state.

It was very emotional inside the courtroom on Thursday day, with the defendant, Isaiah Tryon, crying during closing arguments. Meanwhile the family of Tia Bloomer, the woman Tryon is accused of killing, shook their head but remained silent.

The jury listened to the defense team make one last plea to spare his life and not give him the death penalty. They also had one last look at the surveillance video that showed the murder take place.

This is the same jury who convicted Tryon last Friday after only spending 15 minutes deliberating his guilt for stabbing and killing Bloomer, the mother of his child, at the downtown bus station last March.

“I know that they loved each other. I just didn't know love could be taken so far,” said Tia's sister, Jhantae Bloomer.

Tia's mother and sisters were inside the courtroom when they jury announced their decision. They were overcome with emotion after the announcement of the verdict; crying on the courthouse floor.