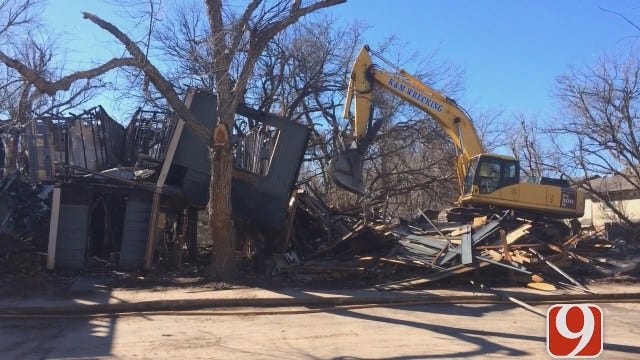 The Lantana Apartments have been an eyesore and public safety issue for Oklahoma City and the surrounding neighborhood for years.

The City calls them one of their most notorious nuisance properties so Wednesday they stepped in to start tearing them down.

The apartments have been the site of numerous arson fires and become a haven for crime.

“There’s been like seven different fires that I know of and a couple of stabbings,” Shiliberg said.

“We’ve been talking to the owners and they promise they’ll take care of the property but we haven’t seen any action over the years,” said Kristy Yager, the City of Oklahoma City spokeswoman.

So the City declared the property dilapidated and paid contractors to tear it down. Crews will demolish seven of the twelve buildings and the city will send the owners: Regatta Capitol Group out of California the bill, an expected $234,000. That will be added to years’ worth of fines that have largely gone unpaid.

“The ownership group has racked up thousands and thousands of dollars in fines and fire safety and police safety calls over the years. They owe the city a lot of money,” Yager said.

Calls to the Regatta Capitol Group have not been returned.

Yager said would be too expensive to tear down the remaining five buildings because of the level of asbestos.

The City estimates it would cost between $750,000 to a million dollars to address the rest of the property.

Demolition should take about a week to complete.