Gearing Up For Golden State: Previewing Thunder vs Warriors 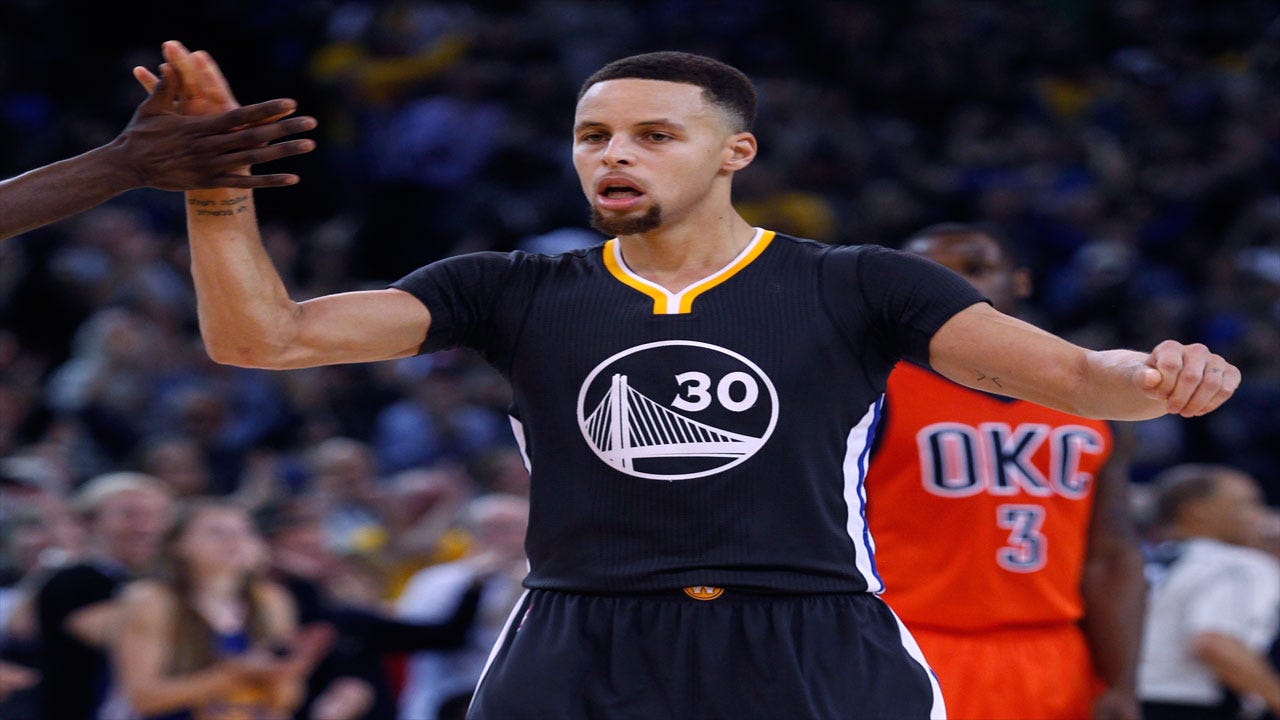 Saturday night not only fancies itself as arguably the best night of the week, but this Saturday evening has just a bit more sauce and spice than normal as the Golden State Warriors are in OKC to take on the Thunder at 7:30 (ABC).

The matchup sets up to put any NBA fan on cloud nine, as some of the best basketball players in the universe will line up against each other in a venue that competes with any throughout the league. There’s little doubt that Oklahoma City fans will flock to Chesapeake Energy Arena to see their beloved Thunder take on the best traveling act since Jordan’s Bulls, and of course everyone in attendance wants to sneak a peak of reigning MVP Steph Curry.

There are more than enough reasons to tune in for this clash of titans, but just in case, here are a few headlines entering this prime time contest:

Warriors could set another record if victorious

Golden State (52-5) is doing things on the court that have never been done before and are in the midst of attempting to finish with the best regular season record of all time. Along with chasing NBA history, if the Warriors do prevail against the Thunder inside the Peake on Saturday night, they’ll set a franchise record for road wins in a season with 29.

The notoriously rowdy Thunder fans will do their best in helping that record isn’t broken in the 405, but slowing down a juggernaut of the Warriors’ caliber will be a whole lot easier said than done.

Of the five blemishes on Golden State’s resume, none have come against the top tier teams in the league such as the Spurs, Cavaliers, Thunder or Clippers, therefore it appears the reigning champs play even better when the level of competition is elevated.

There’s not much better than watching talented players play against talented players, but there’s a few matchups on Saturday night that make the word “talented” seem a bit underwhelming.

Steph Curry and Russell Westbrook will battle it out as not only the two best point guards in the league, but they both currently sit atop the league in Player Efficiency Rating with Curry’s mark of 32.6 ranking No. 1 while Westbrook’s on his tail with a rating of 29.2.

Curry’s finesse and accuracy is a treat to watch, while Westbrook’s ferocity brings a whole different playing style to the table. Watching the two exchange blows is must-watch TV, but it could be one of their teammates who’ll steal the spotlight on Saturday.

If we’re talking PER, then it would be disrespectful to leave out Kevin Durant from the conversation, as the former Texas Longhorn comes in at No. 3 in the rankings with a total of 28.0. Durant could play closer to the basket at times against the Warriors, especially when the Thunder run a small-ball lineup where KD will be forced to guard Golden State’s Draymond Green, whose flamboyant and confident attitude is sweeping the league by storm.

Durant torched the Warriors for his career-high of 54 points back in 2014, so if he catches fire then it should be fun to see if there’s any friendly smack talk between he and Green. Earlier this month when the Warriors beat the Thunder 116-108, Green was limited to only nine points but made up for his lack of shooting with 15 rebounds, six of which were of the offensive variety.

Hear that distant Thunder? On Saturday night, OKC will again get embarrassed at home, this time by Steph's Warriors.

While Curry and Green are the faces of the Warriors, OKC will need to focus a lot of their attention on slowing down the sometimes forgotten Splash Brother, Klay Thompson. The reigning three-point champion is probably licking his chops at the thought of playing against OKC’s porous perimeter defense, and OKC head coach Billy Donovan will need to figure out how to fix all of the defensive woes that have bogged down the Thunder since the start of 2016.

In Oklahoma City’s loss to the Pelicans’ on Thursday night, the Thunder looked clueless on the defensive end as they allowed four New Orleans players to score 21 points or more while allowing the Pels to score 34 points or more in each of the first and fourth quarters.

There could be some hope for OKC’s defense with the continuing return of Andre Roberson from injury. The Thunder were without the defensive minded shooting guard the first time OKC and Golden State squared off, so there’s still some stock in the idea he’ll make a difference on the perimeter when it comes to slowing down the Splash Bros.

Which Thunder rotation will we see?

Throughout much of the start of the season, Coach Donovan took a lot of grief for sitting both Durant and Westbrook the same time and failing to stagger the two star’s minutes. But over the last two games Donovan has opted to switch up the rotation and leave one of his playmakers on the court at all times.

The timing of that decision could be a bit calculated on Donovan’s part, seeing he wanted to tinker with the rotation before his team played the Warriors twice in a six-day span— a team in which the Thunder have outscored by 17 points in 100 minutes played over the last two seasons when Both Durant and Westbrook are on the floor.

The Thunder were locked in a tight one with the Warriors back at the beginning of February, but the Warriors were able to begin pulling away when neither Durant and Westbrook were on the floor to start the second quarter, and it felt like OKC was fighting an uphill battle the rest of the way.

Donovan’s decision to stagger minutes isn’t the only changes he’s made to the rotation, with rookie point guard Cameron Payne out of the mix after failing to make an appearance in Thursday’s loss. It was the first time since December that Payne has failed to get in, and it appears Donovan has decided to let Durant play the role of point guard when Westbrook’s off the floor, or allowing the newly acquired Randy Foye to handle the distributing duties.

No Payne or Morrow after 3 quarters. #News9Thunder

Payne has shown promise throughout this year, and managed to snag the backup point guard role from D.J. Augustin earlier in the season, but there were times when the rookie seemed overwhelmed, especially in the loss to the Warriors where he only made 1-of-7 shot attempts in 12 wide-eyed minutes.

It’ll be interesting to see if that rotation will stick heading into Saturday night’s game, but it’s a very positive sign to see Donovan adjusting his lineup as the season progresses.

Joseph Holloway Tulsa Police said a man is dead after he was shot during a home invasion.

News 9 Seven new virus-related deaths and 854 new coronavirus cases were reported in the state since Thursday, according to daily numbers released by the Oklahoma State Department of Health.
View More Stories