Police Break Up Scuffles Between Protesters Blocks From RNC 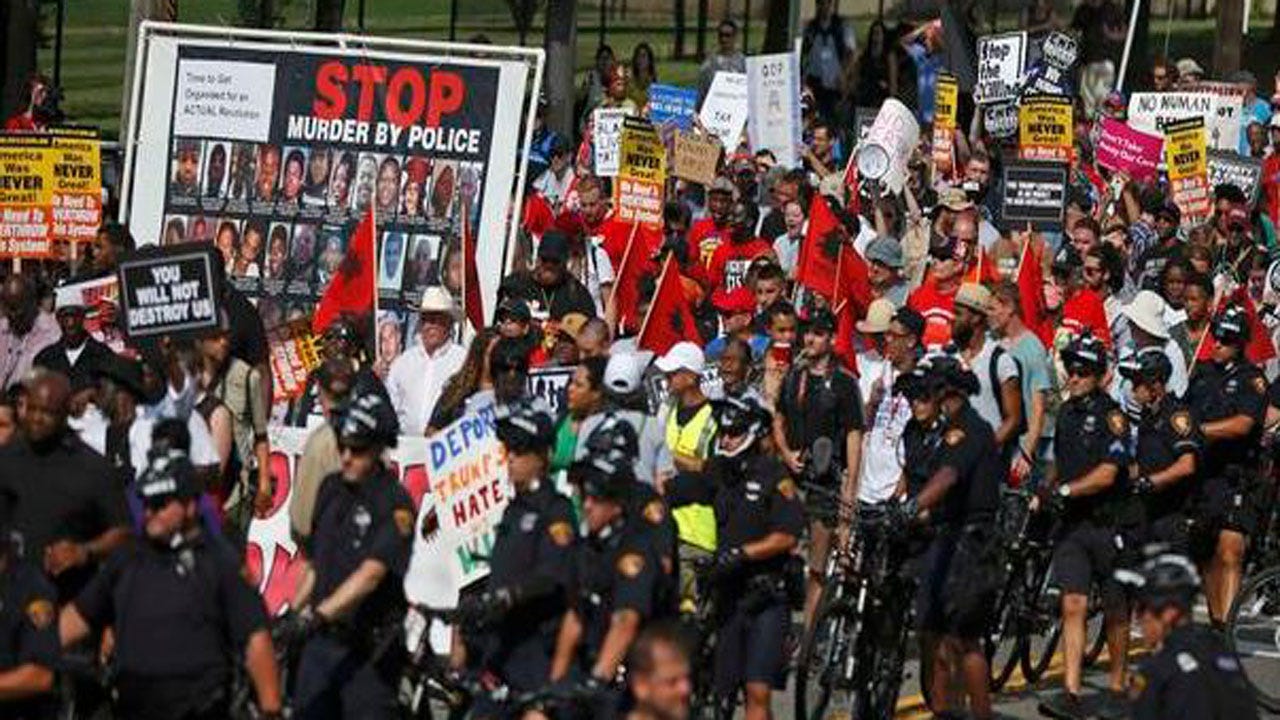 CLEVELAND -- Police broke up a couple of skirmishes between groups of demonstrators a few blocks from the Republican National Convention as large crowds gathered Tuesday afternoon. There was no immediate word on any arrests or injuries.

A scuffle broke out when conspiracy theorist and radio show host Alex Jones started speaking in downtown's Public Square. Police on bicycles pushed back a surging crowd, and Jones was whisked away.

Minutes later, more officers on bicycles formed a line between an organization supporting the Communist Party and a conservative religious group.

Activists from Black Lives Matter, Westboro Baptist Church and the KKK were in the square and were said to be throwing urine at each other, CBS affiliate WOIO reported.

The crowds and the police presence were some of the largest and most raucous gatherings in downtown Cleveland since the convention got underway Monday.

Earlier Tuesday, officials said 11 members of the planning team for the California delegation to the Republican convention were recovering from a bout of norovirus, or what's commonly known as stomach flu, health officials said. No delegates appeared to be affected.

The symptoms, which can include vomiting and diarrhea, were first reported Thursday as logistics members arrived at a hotel about an hour west of Cleveland ahead of the Republican National Convention, said Pete Schade, Erie County health commissioner.

Those who got sick are keeping themselves isolated in their rooms, Schade said, and the Ohio Health Department is trying to identify the source. Norovirus can be contracted from an infected person, from contaminated food or water, or by touching contaminated surfaces.

Ohio Health Department spokesman Russ Kennedy confirmed there was at least one suspected norovirus case and said the victim was apparently infected before arriving in Ohio, based on when the person fell ill.

As the second day of the convention got underway, three people were arrested and charged with criminal mischief for climbing flagpoles outside the Rock and Roll Hall of Fame and Museum early in the morning and hanging an anti-Donald Trump banner. Firefighters took it down.

The museum said in statement that while the rock hall is an "icon of free speech," officials discourage "illegal actions that stress our first responders."

On Monday, the first day of rallies outside the convention featured angry words and a small number of demonstrators openly carrying guns as allowed under Ohio law, but none of the violence many feared could erupt in this summer of violence in the U.S. and overseas.

Police Break Up Scuffles Between Protesters Blocks From RNC