Hield And Parker Named Big 12 Athletes Of The Year 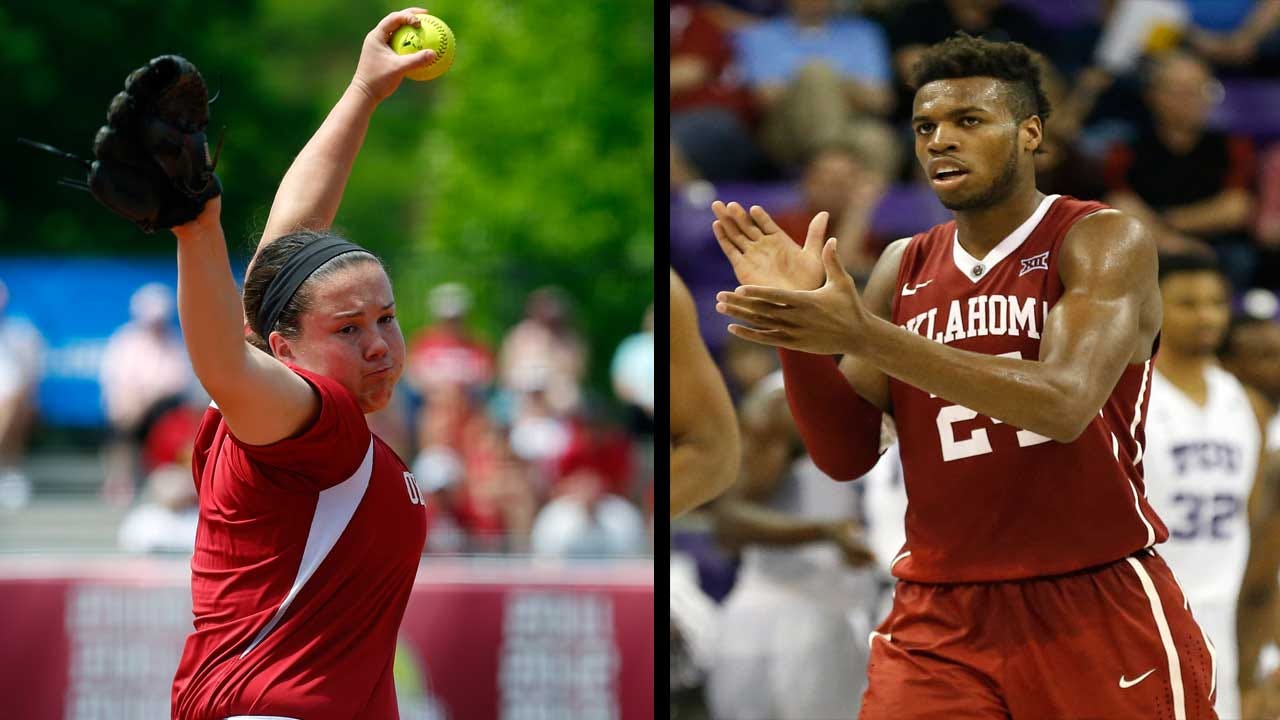 This marks the sixth time in Big 12 history and first in OU annals that the same institution claimed both awards. Eight Sooners have now been named Big 12 Athlete of the Year in the 20-year history of the league, and OU's five such awards since the 2008-09 school year lead the league.

Nominees were submitted by Big 12 institutions and selected — based on athletic performance, academic achievement and citizenship — by a media panel as well as fan voting conducted through the Big 12's social media platforms.

Hield, OU's first men's basketball Big 12 Athlete of the Year and who last month was named Big 12 Male Sportsperson of the Year, registered one of the most successful hoops seasons in league history. The consensus national player of the year, who also won an ESPY two weeks ago as the Male College Athlete of the Year, led the Sooners to their fifth Final Four appearance in program history by averaging 25.0 points per game (second most in the country and most among Power 5 players) and 5.7 rebounds per contest (most among Big 12 guards). He became just the third player in Big 12 history (Kevin Durant and Michael Beasley were the others) to average at least 25.0 points and 5.0 boards per game in a season.

A starter in all 105 of OU's games his final three seasons, he paced the country as a senior in 2015-16 and set a program record with his 147 3-pointers and 4.0 treys per outing. His 925 points were the most in Big 12 single-season history and he assembled a nation-leading 12 games of 30-plus points, 19 contests of 25-plus points and 26 games of at least 20 points. He also registered an amazing 10 20-point halves on the season.

Hield shot .501 from the field, .457 from 3-point range and .880 from the free throw line as a senior and finished his career as the Big 12's all-time leading scorer and ranks second at OU in career points (2,291). The Freeport, Bahamas, native was the No. 6 overall pick by the New Orleans Pelicans in June's NBA Draft.

The Big 12 Player of the Year each of the last two seasons, Hield was also a two-time Academic All-Big 12 selection. He was the 2016 recipient of the Wooden Award, Naismith Trophy and Oscar Robertson Trophy as the national player of the year, and picked up player-of-the-year awards by Sporting News and CBS Sports. He was also the winner of the 2016 Jerry West Award as the nation's top shooting guard.

Hield, a finalist for the Senior CLASS Award, graduated in May with a degree in human relations. He was named a Sooner Scholar six times and has been on the Big 12 Commissioner's Honor Roll twice. As a junior, Hield became the first player in the then-19-year history of the Big 12 to be named player of the year, lead the league in scoring and be named to the academic all-conference first team.

Recognized for his affable personality, Hield was a popular visitor to Norman-area elementary schools and was known for returning to the court to interact with fans both at home and on the road, regardless of the outcome of the game.

Sophomore Paige Parker built on a tremendous debut season and established herself as one of the best pitchers in the country during her sophomore campaign as she helped lead Oklahoma to its third national title in program history. She was named the Women's College World Series Most Outstanding Player, an NFCA First-Team All-American, a first-team all-region honoree, Big 12 Pitcher of the Year and an All-Big 12 First Team selection.

A native of Independence, Mo., Parker tied a school record and led the country with 38 wins while posting a 1.64 ERA and notching 269 strikeouts in 252.1 innings pitched. She made 36 starts in 47 appearances and recorded 32 complete games with 14 shutouts. Parker was a perfect 10-0 in 10 starts in the postseason, registering a 2.13 ERA and two shutouts in the process.

One of 25 finalists for USA Softball Player of the Year, Parker was named Big 12 Pitcher of the Week five times last season and was chosen as the USA Softball College Player of the Week on April 12. She finished third in OU single-season annals with a .927 winning percentage (38-3), ranked fourth all-time at OU with 32 complete games and 14 shutouts, posted the eighth most strikeouts in Oklahoma history (269) and ranked 10th in OU history with 7.46 strikeouts per seven innings.

Parker was named to the CoSIDA Academic All-America First Team and the Academic All-Big 12 First Team, and sports a 3.94 cumulative GPA. A four-time Sooner Scholar and member of the Big 12 Commissioner's Honor Roll, and a three-time selection to the President's Honor Roll, her community outreach activities include participating with her team in Cleats for Kids, visiting the Oklahoma City Children's Hospital and volunteering with a local elementary school in hosting an annual fund raising jogathon.

Parker joins Lauren Chamberlain (2014-15) and Keilani Ricketts (2012-13) as the only OU softball players to be named Big 12 Athlete of the Year since the league's inception in 1996, while former women's basketball player Stacey Dales (2001-02) is the only other recipient of the female award from the University of Oklahoma. With Parker winning this year and Chamberlain taking home honors last year, OU becomes the first school to win the award in consecutive seasons since Nebraska did it in 2006-07 and 2007-08.

Hield And Parker Named Big 12 Athletes Of The Year