Westbrook: I'm Grateful To Extend Contract With The Thunder 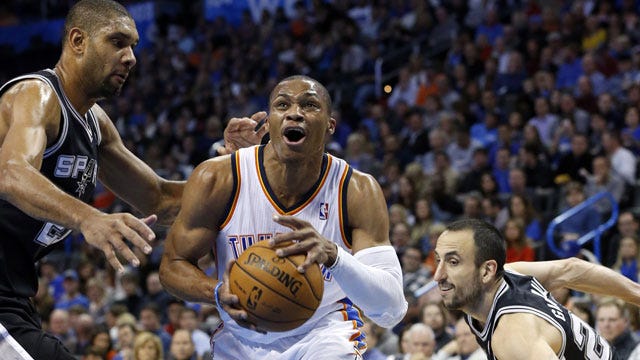 The Oklahoma City Thunder has signed guard Russell Westbrook to a contract extension, it was announced today by Executive Vice President and General Manager Sam Presti. Per team policy, terms of the deal were not disclosed.

“I am grateful to extend my contract with the Thunder and continue to play with the only organization that I have played for and have loved being a part of since I was drafted into the NBA,” said Westbrook. “I’m really excited about moving forward with this group of guys and continuing to play in front of the best fans in the world.”

This past season Westbrook appeared in 80 games (all starts) and averaged 23.5 points (eighth in the NBA), 10.4 assists (second in the NBA), 7.8 rebounds and 2.04 steals (fifth in the NBA) in 34.4 minutes to become just the second player in NBA history (Oscar Robertson) to average at least 23 points, 10 assists and seven rebounds for a single season.

“On behalf of the Thunder organization and the entire State of Oklahoma I want to congratulate Russ and offer my sincere appreciation for not only his profound presence and skill as a player, but for his high character, personal integrity and extraordinary leadership,” said Clayton I. Bennett, Thunder chairman. “We are thrilled he will continue with us and we look forward to exciting days ahead for the Oklahoma City Thunder.”

During the 2015-16 season, Westbrook recorded 18 triple-doubles, equaling the most in the NBA since Magic Johnson accomplished the feat during the 1981-82 season. Westbrook also notched seven triple-doubles in March, the most by an NBA player in a calendar month since Michael Jordan in April of 1989.

"Russell has been an outstanding leader of this team since he was drafted by our organization eight years ago. His competitiveness, character, and unique athletic ability have propelled him to the forefront of the game,” said Presti. “Russell personifies many of the traits that are synonymous with Oklahoma and Oklahomans. We are excited that Russell has chosen to continue to build the legacy of the Thunder with us as we move forward together."

A five-time All-Star and two-time All-Star MVP, Westbrook received All-NBA First Team honors at the conclusion of the 2015-16 season. This past year, Westbrook was twice named the Western Conference Player of the Month, and his 54 double-doubles represented the most for a guard since the 2007-08 season (Chris Paul).

In eight seasons with the Thunder, Westbrook holds career averages of 21.5 points, 5.6 rebounds, 7.6 assists and 1.73 steals in 34.0 minutes per game. The UCLA product has helped guide the Thunder to the Western Conference Finals in four of the past six seasons.

Selected No. 4 overall in the 2008 NBA draft, Westbrook was named to the NBA's All-Rookie First Team; during the 2014-15 season, Westbrook led the NBA in scoring after averaging a career-best 28.1 points per game.

Westbrook: I'm Grateful To Extend Contract With The Thunder