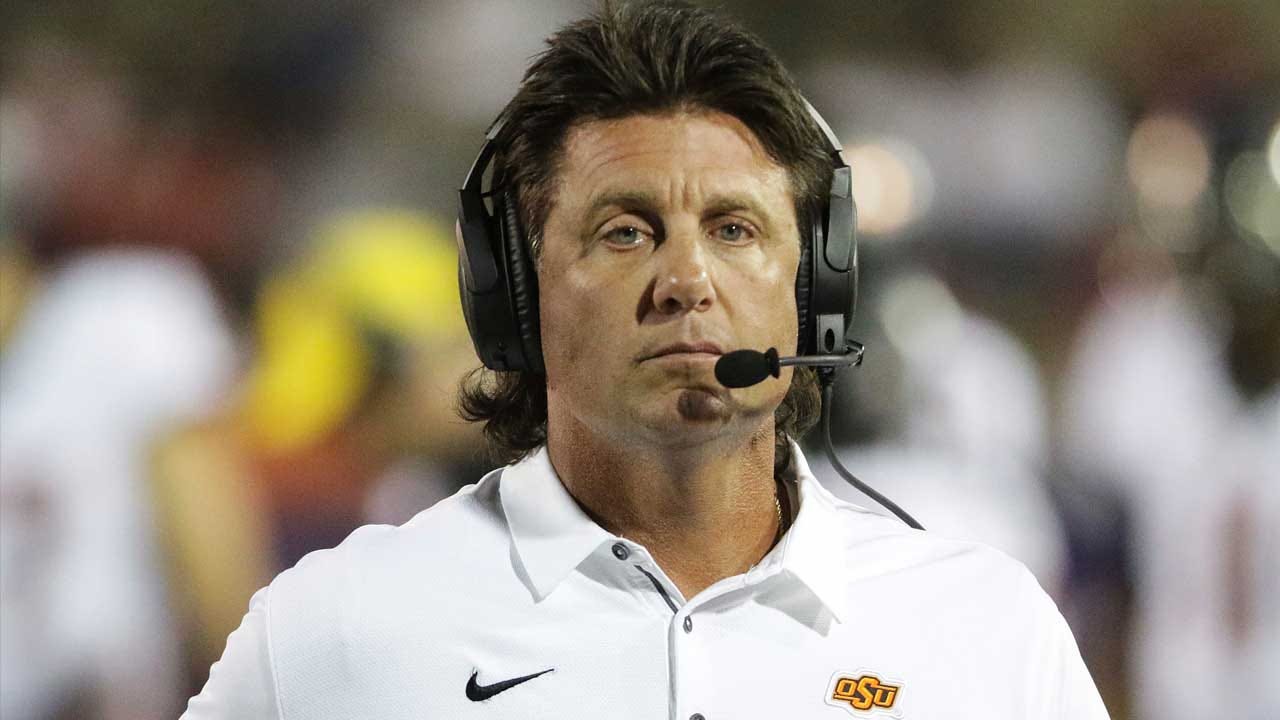 Coach Mike Gundy met with media Monday at Boone Pickens Stadium to preview the Cowboys’ game against Oklahoma this Saturday. His comments:

Opening statement:
"Last week's game was pretty much what we thought. We weren't very good on special teams and we were able to verify that after watching the tape. We need to find ways to improve in that area. We're really proud of what J.D. King brought to the table, with him having touched the ball 41 times in a conference game as a true freshman. It was a big factor for us. On to the next one and we're obviously playing the best team that we've played up to this point. You guys know all about them, so I don't really need to talk about that. We got the guys together last night, had a good workout and we'll get back to work on Tuesday."

On J.D. King's progression:
"It's pretty simple with him - every once in a while, we come across a young man that's very mature. Not only physically, but mentally. The big scene doesn't really affect him much and he's been that way since day one. It's hard to tell in recruiting, but that would be the best illustration as to why he has had success up to this point. There aren't many young men that can come in, at any position, and be successful right away, and he's been that way."

On what he looks for from young players early on:
"You see some of it in August. When people ask me who is going to play, and I say that it's going to take at least two weeks and I don't really give any information until after week three, it's because we don't know. We have to see them really extend themselves and get fatigued, take hits, particularly at that position, and then still come back to practice. Sometimes you can see it in the later-parts of August, but as I say, you never really know until you see them play. He showed early on signs of not being, I call it ‘big-eyed,’ and fortunately for us that's come true."

On sensing J.D. King's maturity early on:
"He carries himself differently. It's not always foolproof or 100 percent different, but for those of you that have kids or the neighborhood kids come to your house, it doesn't take long to figure out which ones are immature or mature. It happens really fast. We love them all, but when they leave you're like, ‘We're going to have to watch that one right there.’ It's very similar with young men that come into your program. They're focused in meetings and in practice. They're serious about what they do. Sometimes, we have guys in our program that don't develop until their second or third year, but he's been that way since day one. He carries himself that way all the time. When he came on his unofficial visit, he came with his mom, and they were here for eight hours and he walked into my office and said, ‘I'm coming to Oklahoma State.’ I'd heard that before and his mom, she was there, and she said, ‘If he says he's going to do it, he's going to do it.’ Which, I've heard that before. I've heard grandparents say. ‘My word is my bond. My grandson's word is his bond, and if he says he's coming there, he's coming there," and three weeks later they change their mind. But from him, he never budged. That's the kind of person he is and that's the way he is now."

On what makes Bedlam so special:
"There's a lot of great rivalries across the country, but the one this about this state that's so different is that we don't have pro football. The addition of the Thunder has been fantastic for this state, but this week everyone goes to work wearing orange or red. It's a fun week and it's always more entertaining when both teams are successful and playing well. I think it's a fun time for everybody in the state."

On if he sees anything differently that OU does as compared to when Bob Stoops was there:
"It's hard to say with Coach Riley being there and me not being there, but from a schematic standpoint of what they do it's pretty much the same."

On what he attributes the struggles on special teams to:
"Well, we're not kicking the ball very well. We've been average in our kickoff location, which is important. We have not hit the ball as good as we need to, field goal-wise. Now, our percentage has been pretty close to average, but they've been short field goals so that makes everyone not feel so good about it. Then we've been below average in punting and that's been very unusual for us. Those are mistakes we should not be making. There's obviously the coaching tied into it, but there's also the players tied into it. Everyone needs to accept responsibility and that's what we'll work on tomorrow."

On if it's possible to fix special teams struggles in November:
"Yes, we can improve considerably. The errors that we had at West Virginia shouldn't have happened. We can improve that, and it will be a considerable part of our plan over the next three or four days."

On how the development of the cornerbacks has helped the improvement of the defense:
"Well, they've had two months. You all wanted my opinion in the preseason and I said, ‘I don't have a clue.’ I said they're young, they're unproven, they're inexperienced and that we'd know a lot more at the end of October, November. They've improved. This will be the greatest challenge for them with (Baker Mayfield) throwing it and them making plays on the perimeter. They're improved. They've got a lot of work ahead of them. They'll make mistakes at times, like most college players do, but they're way ahead of where they were in early September."