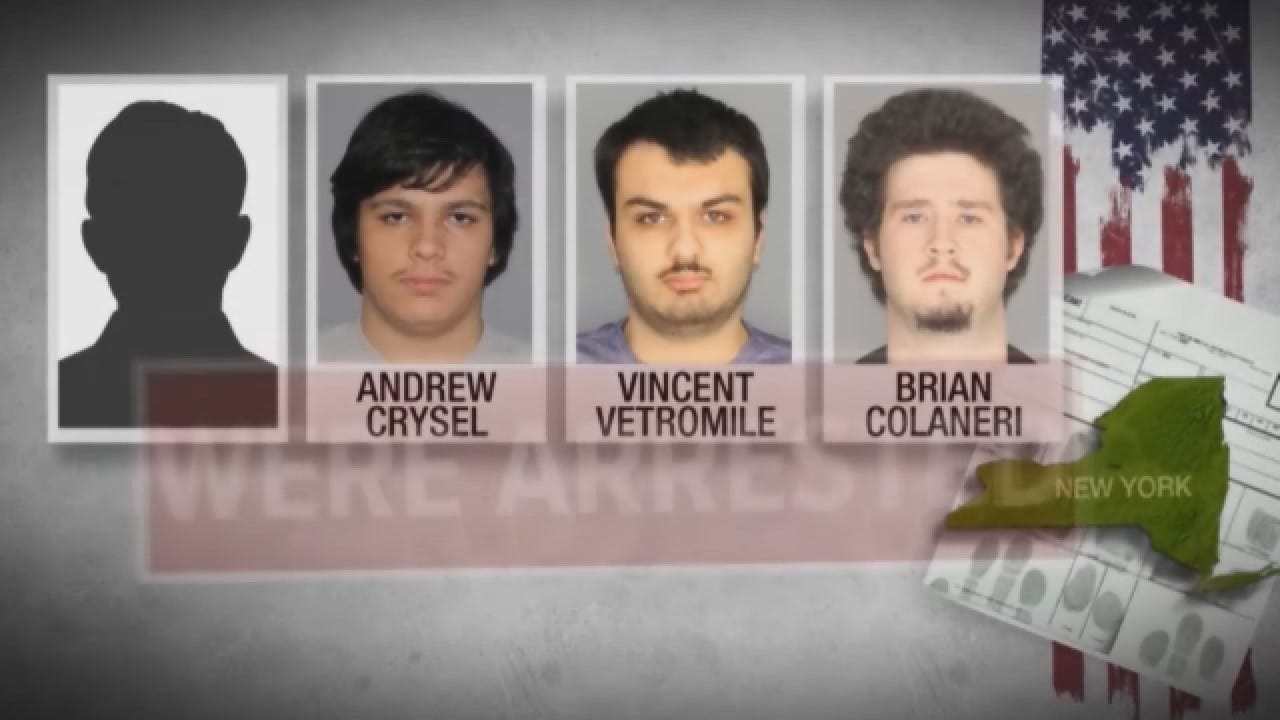 Three adults and one minor face charges after an alleged bomb plot intended for a Muslim community in Hancock, New York, according to the Greece Police Department.

Greece Police Chief Patrick Phelan said the plot was discovered following a report from a student at Odyssey Academy in the Greece Central School District.

According to Chief Phelan, a 16-year-old student showed other students a picture of another person on a phone messaging app and made a comment that implied they looked like a school shooter.

Chief Phelan continued to say that there was no specific threat of a school shooting. Another student at the high school overheard the comment and reported the incident to security at the school.

Upon investigation and interviews with the students, police served search warrants at least five locations, leading to the arrests of 20-year-old Brian Colaneri, 18-year-old Andrew Crysel and 19-year-old Vincent Vetromile, and the 16-year-old. The 16-year-old is being charged as a youthful offender under New York State’s Raise The Age law, Phelan stated.

Crysel, Colaneri, Vetromile, and the 16-year-old are charged with first degree criminal possession of a weapon and conspiracy.  The chief added that the charges are related to the weapons in the case, not the plot itself, but that federal charges for the alleged plot could be added.

Chief Phelan said 23 firearms and three homemade improvised explosive devices (IEDs) were recovered. He added the IEDs were found at the home of the 16-year-old and the firearms were found at various locations.

The IEDs consisted of items like BBs, nails, gunpowder and more, the chief says.

The firearms consisted of rifles and shotguns that are legal in New York State, the chief added, explaining that some of the guns were purchased by the suspects and other they likely had access to through family members.

Several electronic items, such as phones and computers, were seized for analysis.

There is a fifth person of interest in the case whose home was searched in the investigation, but no charges have been filed against that person yet.

The chief added the group had a plan to attack Islamberg, but did not say exactly how or when. He says that state police in the Hancock area were made aware that there was a threat toward the community.

Although there was no threat made toward the Odyssey Academy, Chief Phelan stated there was a Greece police officer at every single school in the Greece Central School District on Tuesday.

The chief credits the intuition of the student who reported the picture to security and the fast action of the school and law enforcement as stopping a plot that would have killed many people.

“The kid that initially said something to an adult saved people’s lives and the lesson is, you tells kids this all the time, we say ‘If you see something, say something.’ You got to report it if you see something suspicious. The lesson is that it worked,” Chief Phelan said while briefing reporters Tuesday afternoon.

When asked about Islamberg, a resident did not want to speak with us on Tuesday as authorities say the investigation is in the very early stages.