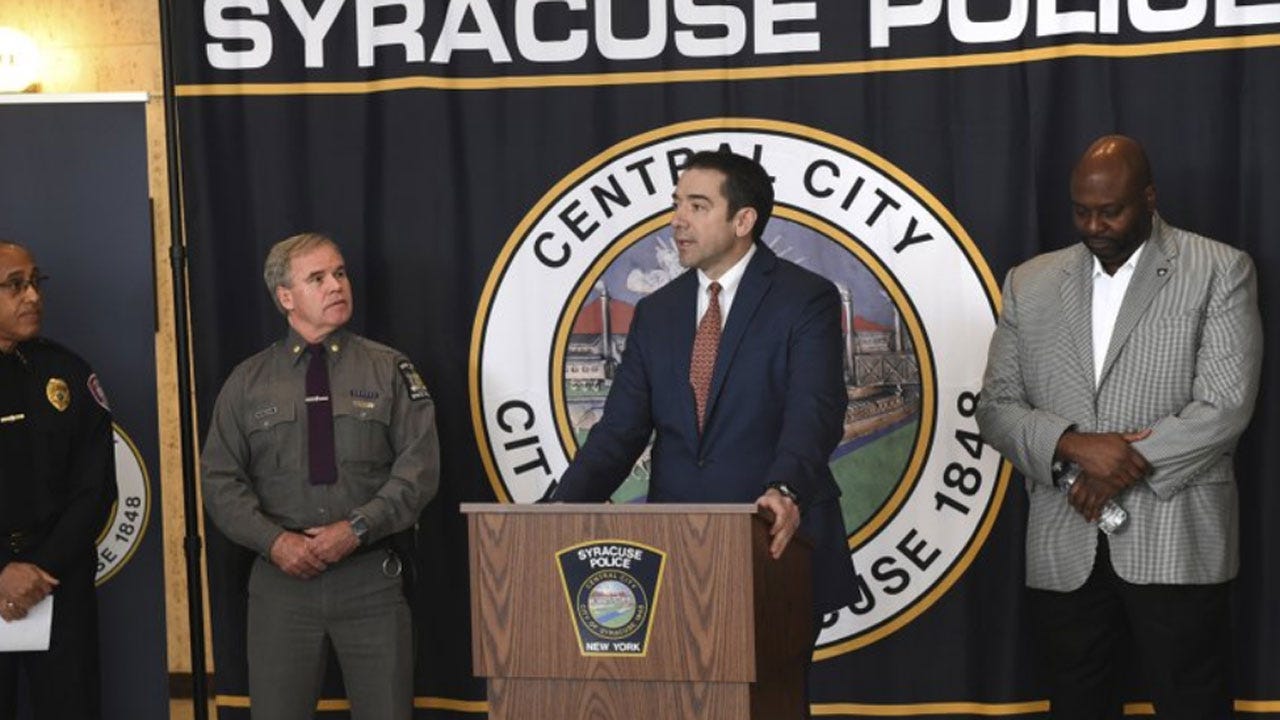 Reports that a white supremacist manifesto was sent to some Syracuse University students' cellphones was likely a hoax, the chancellor said Wednesday while adding that the school fell short in responding to a string of racist incidents.

News of the screed - which authorities had described as an apparent copy of on one written by a man accused of killing 51 people at two mosques in New Zealand in March - was the latest episode to shake the central New York campus this month after a series of bigoted graffiti and verbal slurs.

But authorities haven't been able to find anyone who directly received the manifesto, Chancellor Kent Syverud told the University Senate on Wednesday.

"It was apparent that this rumor was probably a hoax," he said, "but that reality was not communicated clearly and rapidly enough to get ahead of escalating anxiety."

A day earlier, authorities said they had gotten reports that the document was posted in an online forum and that attempts were made to send it to students' cellphones at the main campus library around 11:30 p.m. Monday via AirDrop. It's a file-sharing service that lets iPhone users send files to iPhones or iPads that are near enough to be within Bluetooth or wi-fi range.

Syverud said that because of the late hour, the university wasn't well positioned to address the matter and the wave of alarm that quickly spread on social media. By Tuesday, city, campus and state police and the FBI were discussing the matter at a news conference.

At a campus forum later Wednesday, student protesters - who have been seeking changes to address hate and diversity - called for Syverud's resignation and walked out when he wouldn't promise to sign onto all their demands as written, according to news accounts. They marched to his house, chanting, "Sign or resign!"

The forum continued, with the Chancellor leaving at one point, reports CBS Syracuse affiliate WTVH-TV. He returned, saying he'd met privately with some of the student protesters and hoped they could come to an agreement by Thursday. He didn't reveal possible terms of any agreement.

There have been a dozen instances of racist and anti-Semitic graffiti appearing on or near campus in recent weeks, according to Syverud, who said police believe that one to five people connected to the university are responsible for the vandalism.

Authorities also have fielded reports of shouted slurs targeting Jews, Asians and black students at the private university of nearly 23,000 students. About 8% are Hispanic or Latino, 7% are black and 6% are Asian, according to the university website.

Syverud on Sunday suspended a fraternity after a black student filed a complaint saying she was verbally harassed by people leaving a party at the frat the night before. All fraternities' social events were also suspended.

Four of the 14 people involved were Syracuse students and have been suspended, Syverud said Wednesday. He said the rest attend other schools that have been informed of the incident.

Students have staged a sit-in at the Syracuse student wellness center since Nov. 13 with a list of demands that includes the expulsion of students for hate crimes and stronger diversity training for students and staff.

The university's international students also have listed concerns, and about 100 law and medical students marched Wednesday to show support for the wellness center protesters, according to Syracuse.com.

Syverud pledged Tuesday to take steps including clarifying the student code of conduct, enhancing security, and investing at least $1 million in curriculum changes to address diversity.

Facing criticism of his leadership from Gov. Andrew Cuomo, Syverud said Wednesday that there "are things that have not been handled well enough during this series of recent events," including the manifesto reports and communication about the early graffiti incidents.

He said the university was making improvements, among them ensuring it's prepared to handle problems at any time of day.