A Possible Breakthrough Treatment For PTSD

Could a simple shot in the neck be a break-through for the debilitating symptoms of post-traumatic stress disorder? The toll from PTSD is growing. About 20 veterans a day commit suicide in what the VA is now calling an epidemic. Only 40% find relief from PTSD with current treatments. The new procedure called stellate ganglion block, or SGB, is so fast-acting that many believe it could be a game changer. Used for decades to treat chronic pain, it's only recently been tried for PTSD. Now the U.S. Army is spending $2 million to find out more. Nobody is calling it a cure, but the promise of a new therapy can't come soon enough for many veterans we spoke with - frustrated and despairing that nothing they have tried has worked.

John Zehring: My PTSD was like a monster on your back that controls your entire life.

This is what Sgt. First Class Jonathan Zehring faced during his 455 days as part of the American offensive in Kunar province in eastern Afghanistan. The densely forested mountains provided cover for the Taliban fighters who launched almost daily attacks. After 15 months, Zehring couldn't shake the feeling he was going to be ambushed at any moment. 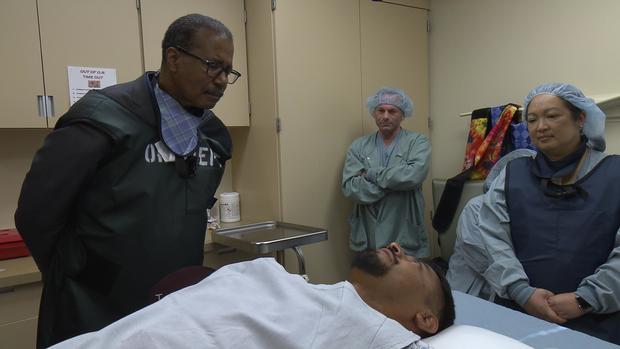 Bill Whitaker: So your instincts served you well in Afghanistan?

Bill Whitaker: But what about when you came home?

John Zehring: When I came home, it did not serve me very well because my brain was still in war. But I was livin', tryin' to be a father and a husband and and trying to be a circle in a whole room of squares. I did not feel like the same person anymore.

He suffered for 12 years. His marriage fell apart.

John Zehring: I went through this period of time when I was like, "Man, I wish I would've just died in Afghanistan." I coulda been remembered as a hero and a shining beacon of what soldier's supposed to be.

Finally he reached out to Walter Reed Medical Center.

Bill Whitaker: Were you aware that you were suffering from PTSD?

John Zehring: I thought it was a joke.

Bill Whitaker: You thought PTSD was a joke?

John Zehring: At first. Everyone knows it's hard being in combat. But like that's our job. So being around only military veterans that are all combat guys it was difficult to ever raise your hand and ask for help.

After 18 years of continuous war, the numbers of soldiers and veterans suffering from PTSD has reached an all-time high. First-line treatments at the VA are antidepressants and talk therapy. Zehring told us he was asked to write down his worst combat memories.

John Zehring: They wanted me to read it 20 times before I went to bed. And I did it one or two days. And I crinkled the piece of paper and threw it away. I'm like, "This-- why am I doin' this?" I'm like, "I watched people I know die." Like, that's always gonna bother me.

Bill Whitaker: Did you see any improvement?

Marine Sgt. Henry Coto also was at the breaking point.

Henry Coto: I thought if I keep going the same way I was going, I there was only two ways that was gonna end. Dead or in jail.

He spent months patrolling Iraqi towns like this one, the war on every corner. After four deployments, Coto told us he was plagued by nightmares. He self-medicated with alcohol and marijuana.

Henry Coto: Even though I try to tell myself, hey I can calm down, I'm no longer over there, it was really hard for me to shut it off.

Bill Whitaker: What did you think of that at the time? 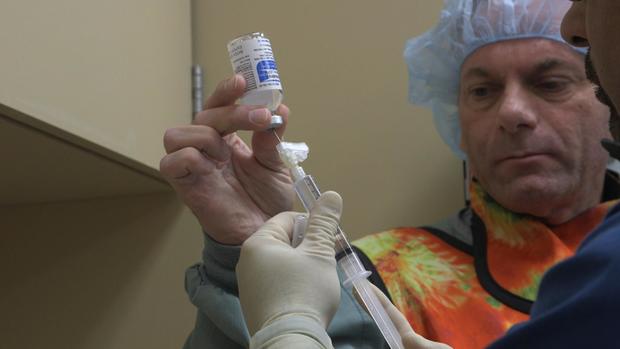 He told us he had tried 12 medications, all the VA had to offer, but nothing worked.

When his doctor suggested an experimental treatment called stellate ganglion block, or SGB, he had nothing to lose.

We went along to watch Henry Coto's second treatment at the Long Beach VA.

The injection took less than five minutes. Within two minutes, Coto told us he felt a huge difference.

Henry Coto: Like I can't control my smile right now.

Bill Whitaker: Is it like a sense of euphoria?

Henry Coto: It's like a big weight has been lifted off my shoulders and my chest. And I can actually relax.

He came back for a second SGB to bolster the effects of the first two months earlier.

Bill Whitaker: It immediately changed your mood, your behavior?

Henry Coto: Immediately. My brother took me home. He saw that I was constantly smiling, and he's like, "Dude, I don't know what they did but it's amazing." 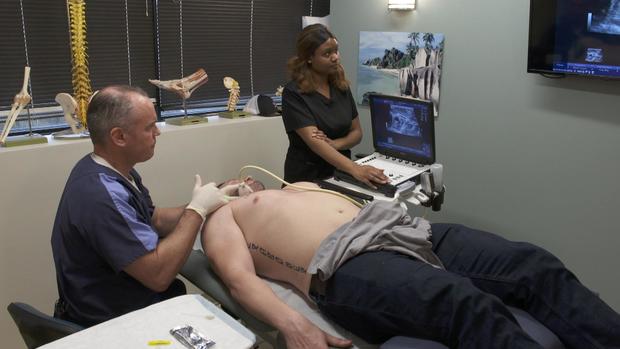 This is how the procedure works: a local anesthetic is injected deep into the neck to bathe a cluster of nerves called the stellate ganglion.

These nerves help control the brain's fight or flight reactions, signals that go haywire with PTSD.

Doctors use a fluoroscope and contrasting dye, you can see it spread out next to the spine, to guide the needle to the stellate ganglion. When the anesthetic is injected it seems to numb, or turn off, the PTSD symptoms. It clears the body in a day, but the effects last up to 6 months, for some even longer. There are no known side effects.

Bill Whitaker: Were you surprised at the outcome?

Dr. Michael Alkire is trying to pinpoint changes in the parts of the brain associated with PTSD. Doctors don't fully understand how SGB works, but the newest theory is based on research that shows PTSD is not just psychological. Exposure to bomb blasts and the prolonged stress of dangerous re-deployments can cause physical changes to the brain, making it hyperactive.

Dr. Alkire told us 80% of their SGB patients had relief from depression and suicidal thoughts.

Bill Whitaker: It almost sounds like you're rebooting these vets' brains.

Dr. Michael Alkire: That is exactly a very good way to think of it, yeah.

In the waiting room, Henry Coto's mother is overwhelmed. After watching her son self-destruct, she told us SGB gave her son back. It's not a stand-alone cure, but Coto told us his regular therapy now is starting to work.

Henry Coto: I in the first couple weeks, I didn't believe it. People would be like, "Hey your personality has really changed," and stuff like that. I think we're going on two months it feels like I got a second chance at life. 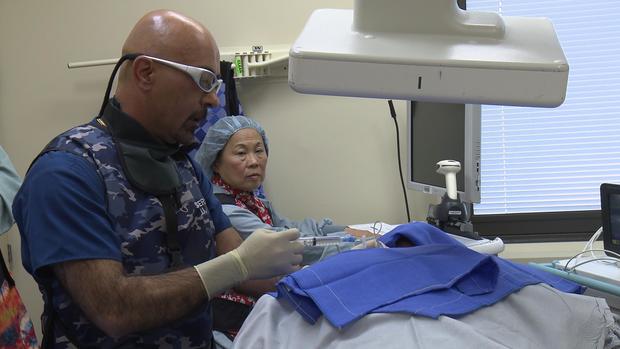 Despite its promise, SGB is available at only 12 of the 172 VA hospitals. It's still considered experimental. The army's study is the first clinical trial for SGB with a placebo. Over 100 active duty soldiers with PTSD participated, and it's now under peer review. If the anecdotal success of SGB is duplicated, it could revolutionize the way PTSD is treated.

For now, most veterans rely on word of mouth to find private clinics, like this one run by Dr. Sean Mulvaney, a former Navy seal.

Among military doctors, he was the first to see SGB's potential, especially after his years as a combat medic for special operations soldiers.

Dakota Meyer, a former Marine corporal, sought Dr. Mulvaney's help. In 2011, he was the first living Marine to be awarded the Medal of Honor since the Vietnam war.

He'd read a newspaper article about a treatment for – of all things – hot flashes -- that targeted the same nerve signals that ptsd disrupts. So he tried it. Since then he's done about 1000 injections: he found 70 per cent of the soldiers he treated had reduced anxiety and paranoia.

Dr. Sean Mulvaney: These people, they wrote a blank check to their nation that included their life. And, as citizens, we need to help them when they come home, when they're broken.

Johnathan Zehring also found his way to Dr. Mulvaney for an SGB.

John Zehring: I felt like a brand new man. And when I say brand new man, what I mean was I had a control of my feelings. And it was like I was my own self, my old self, I was John Zehring, pre-combat again.

After the shot, Zehring found something else had changed too: he had a different attitude toward therapy.

Don Bolduc: I think there's enough evidence out there that this is a valid therapy. And it's something that works.

Former Brigadier General Donald Bolduc had an SGB injection when he was commander of special operations in Africa. It made such a difference that in 2016 he became the first, and so far, the only, active duty senior officer to admit that he too suffered from PTSD. It took him eight years to overcome the stigma.

Bill Whitaker: Do you remember this soldier?

A former Green Beret, Bolduc showed us a memorial in his office to the 72 soldiers he lost over 10 deployments. He cheated death himself numerous times, surviving firefights, a 2,000 pound bomb, and this helicopter crash which knocked him unconscious.

Bill Whitaker: What was it like to be around him during that time?

It was his wife Sharon who finally made bolduc confront his PTSD. Get help, she said, or she and the children would leave him.

Sharon Bolduc: I'm done. I can't do this by myself anymore. I didn't marry you to become a single parent.

Bolduc had tried traditional therapy with little relief. It was the SGB, he told us, that finally lifted the fog.

Don Bolduc: It's magnificent. Everything was crisper and clearer.

Sharon Bolduc: He was so much more relaxed, like--

Sharon Bolduc: So I think I even said, "Why didn't we do this years ago?" (LAUGHTER) You know? But I don't think we knew about it.

Now retired, Bolduc told us he was bypassed for a promotion. Part of the reason, he believes, is his outspokenness about PTSD among active duty soldiers.

Don Bolduc: Not one of my superiors reached out to me. One told me that it's not gonna bode well for me, and recommended that I stop talking about it because the more I talk about it, the more problems they have.

Bill Whitaker: It's so widespread in the military today, but yet there's this stigma.

Bill Whitaker: So how important is stellate ganglion block in fighting post-traumatic stress?

Don Bolduc: I think it's hugely important and I think that it needs to be an intervention that's part of every post-traumatic stress therapy.

Part of Bolduc's therapy is Victor, his service dog, who helps him stay calm.

Bolduc continues to speak out, and tells audiences all over the country that treatment for PTSD should carry no more stigma than a broken ankle.

Johnathan Zehring told us SGB was a game changer. Henry Coto said he wished other veterans could find the relief he did.

Henry Coto: I've lost a couple friends to suicide. You know and just thinking that, you know, this treatment, if it's was widely available, you know, those guys could've been around.

John Zehring: I've never had this relief before. There never wasn't a pill. It wasn't a bottle of alcohol. It was a shot in my heck that I've never heard of that lasted maybe-- a 15-minute procedure. And it helped me.