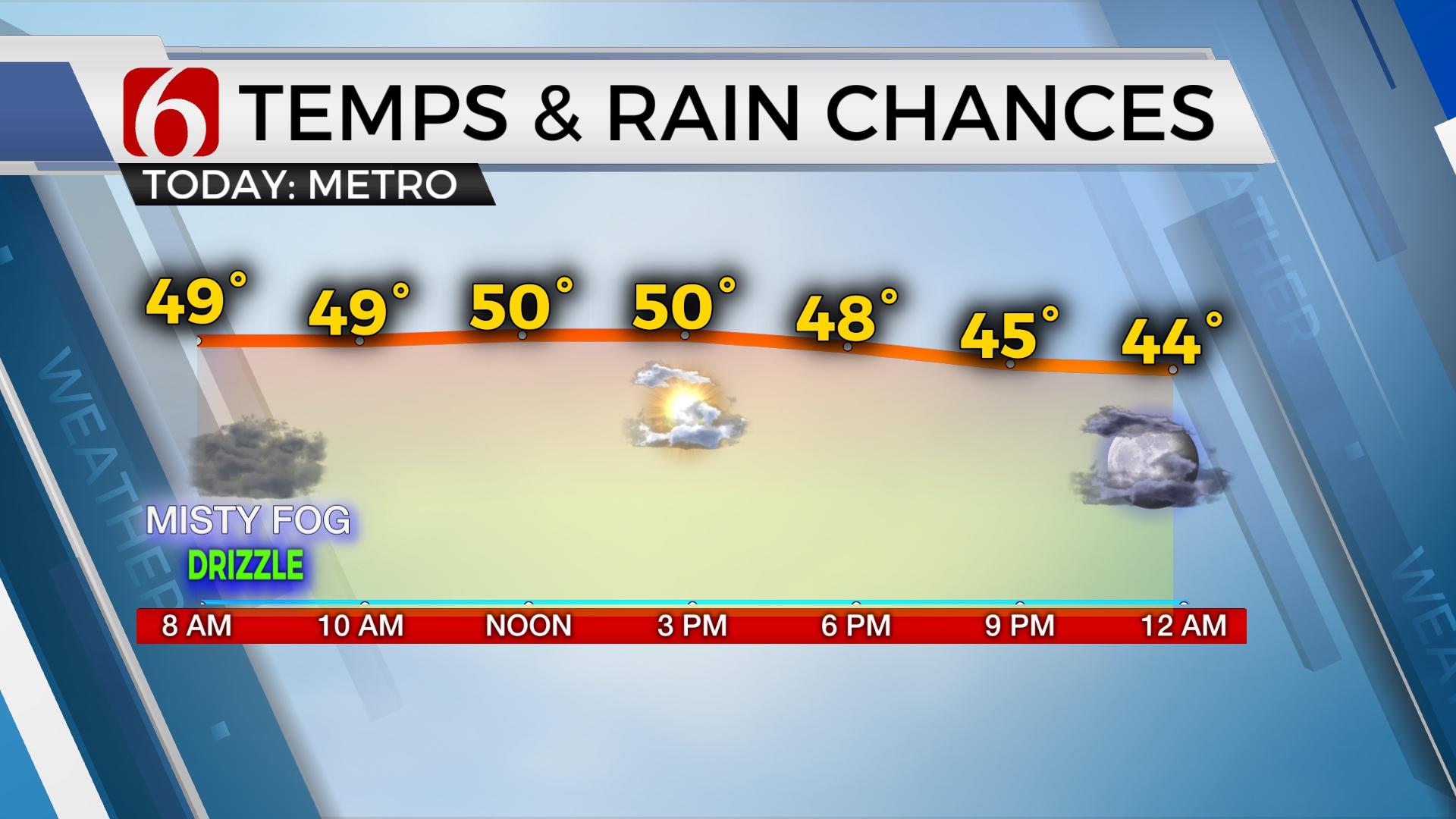 If you’re into podcasts or in a rush, check out my daily weather update. Search for NewsOn6 and ‘Weather Out The Door’ on most podcast providers, including Spotify, Stitcher and Tune-In, or Click Here to listen on Apple Podcasts.

TULSA, Okla. - Expect misty and foggy conditions on Tuesday, before rain chances return to the area. At least two upper strong troughs will have an influence on our weather during the next 7 days. One arriving Wednesday evening into Thursday, and a stronger trough early next week. The first will fuel rain with some thunder developing Wednesday and exiting early Thursday morning. The second and stronger trough brings thunderstorm chances, including the possibility of severe weather across eastern Oklahoma and western Arkansas early next week. In Between these two features, a small disturbance will impact the area late Friday evening into Saturday morning that may generate a few scattered showers and storms near and south. A weak surface front has slowly progressed across northern Oklahoma and is positioned slightly south of the I-40 corridor on Tuesday morning. Fog and some drizzle have developed along the cool side of the boundary and may hinder visibility for the early morning commute. Use caution while driving. This front also influences temps ton Tuesday and Wednesday with cooler readings north and milder-not-as-cool temperatures south. Highs on Tuesday will range from the upper 40s north and near 70 across far southeastern OK. As the front stalls and slowly lifts north later Tuesday night, the first trough nears the state in the southwesterly upper flow. Rain will develop across the Red River and expand northeast, along, and north of the boundary Wednesday into early Thursday morning. Low level moisture depictions support mentions for locally moderate to heavy rainfall. Severe weather parameters are mostly lacking. No severe weather threats are expected other than locally heavy rainfall. Rainfall amounts from one to two inches will be possible with this system. As the first wave exits the central plains, precipitation ends Thursday after the early morning hours. The front will lift northward bringing highs into the upper 60s or lower 70s Thursday before another front moves southward Friday. This will keep highs in the lower 50s Friday and Saturday. A weak disturbance arrives Friday evening across Texas and brings some scattered showers and storms along the Red River Valley into early Saturday morning. We think most of Sunday will be rain-free. South winds return Sunday as pressure falls before the stronger trough arrives early next week. I'll have more specifics regarding Monday in tomorrow morning's post. The pattern supports mentions for strong to severe storm chances near or slightly east. Colder air is likely to arrive following next week's system which will continue for most of next week.

Thanks for reading the Tuesday morning weather discussion and blog.