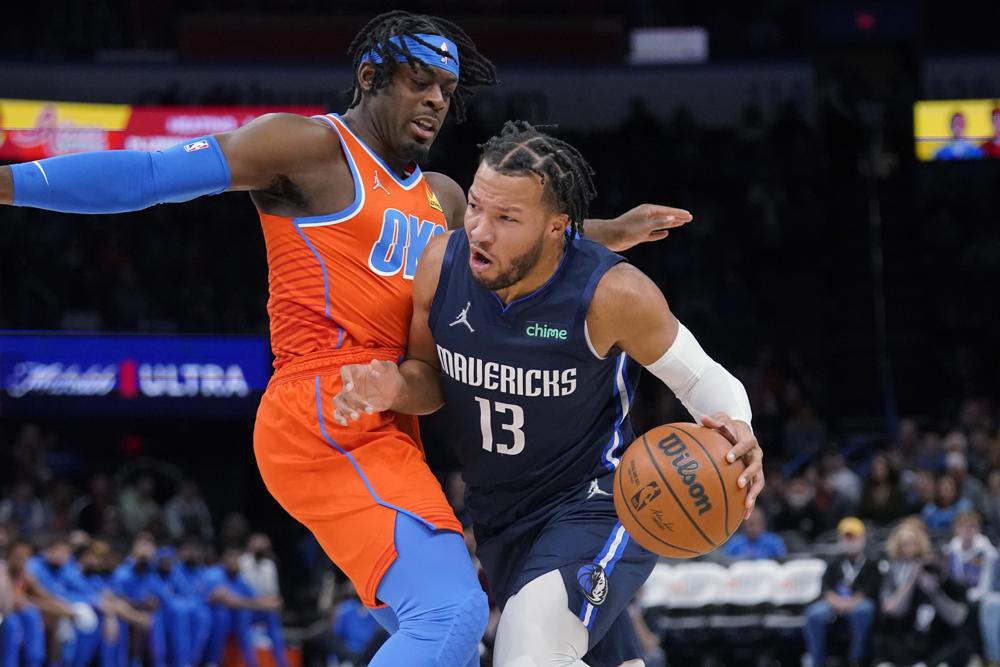 Jalen Brunson had 18 points and nine rebounds while starting in place of injured star Luka Doncic, leading the Dallas Mavericks to a 103-84 win over the Oklahoma City Thunder on Sunday night.

It was the first time this season the Mavericks won without Doncic in the lineup.

Doncic experienced a flareup of a previous ankle injury in Friday’s game against Indiana and is being held out for back-to-back games. Dallas had been 0-4 without the All-Star guard this season.

“We just tried to find ways to be productive without one of the best players in the game,” Brunson said. “It’s tough, but we just kept playing off each other, keep being aggressive and finding each other. We tried to play with pace and get easy baskets whenever we can.”

Mavericks coach Jason Kidd pointed to Brunson’s five-point run after the Thunder closed to 60-54 midway through the third quarter as a key sequence and praised Brunson’s ability to adapt to his role in the absence of Doncic.

“It’s a luxury to have him come off the bench, but he can start. He’s a true pro,” Kidd said. “He helped us play with pace tonight and did a great job running the offense when we just had one day to put all that in.”

Brown entered two minutes into the game when starter Dwight Powell lost a contact lens and took advantage of the opportunity to get a quick basket and a blocked shot.

“I thought that kind of gave us some energy,” Kidd said. “He deserved more minutes and the more minutes he gets, the better he gets. He earns them. He just gets his teammates cheering for him.”

Brown finished last season with the Thunder and admitted he felt comfortable playing on a familiar court.

“It was definitely a great experience getting to see my old coaches and teammates. I definitely had a lot of fun out here,” Brown said.

The Mavericks (13-13) jumped out to a 7-0 advantage but Oklahoma City (8-18) came back to hold its only lead in the final minute of the first quarter as Gilgeous-Alexander scored five straight points.

Dallas got a 3-pointer on its last possession of the period from Trey Burke to take a 28-27 lead after the first and expanded it to 10 at halftime. The Thunder got as close as six in the second half, but Brunson’s spurt pushed the lead back to double digits and Oklahoma City never challenged the rest of the way.

Thunder: Lu Dort sprained his ankle late in the first half and didn’t return. Theo Maledon, who didn’t play in the first half, replaced Dort in the lineup to start the second half. Dort had 10 points before exiting.