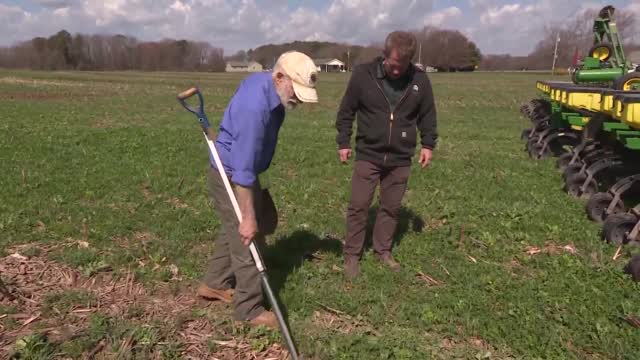 “Our springs are colder and wetter. Summers are hotter and drier. I mean, it's something that affects my livelihood and affects the future of my farm,” said Hill.

But the fourth-generation farmer has learned ways to fight back. He started adopting “climate-smart” techniques around 20 years ago. He plants cover crop after harvesting his commercial crop to keep the soil nourished during the off-season, and he avoids tilling or plowing to keep the dirt intact.

Ray Weil, a professor of soil science at the University of Maryland, says the farm’s soil is actually capturing greenhouse pollution.

“Lots and lots of carbon that was carbon dioxide in the air is no longer in the air. It's now in the soil. And it's going to stay here, especially if we don't turn it up mechanically, which tends to burn it up,” said Weil.

Hill is working with a Seattle startup company called Nori to help measure how much he’s reducing his carbon footprint.

“You have to sequester the carbon prior to marketing your credits. We sequester roughly one ton of carbon per acre per year,” explained Hill.

Not only a boost to the environment but his bottom line. He sells his carbon credits on a marketplace where businesses or individuals can support the cause.

“So, I get to pick my price. It's essentially an auction block,” explained Trey.

It’s a win-win the Biden administration hopes to encourage.

“You see companies, food companies, and others interested in investing in agriculture as a way to reduce emissions,” said Robert Bonnie, a senior advisor on climate change at the USDA.

Bonnie says the USDA is currently soliciting feedback from individuals in agriculture and forestry as the agency works to develop new tools to help the movement grow.

“What we're looking at is, can we create some flexible financial tools, a carbon bank, if you will, to finance climate, smart agriculture, and forestry on working lands,” explained Bonnie. “We think if there are ways for us to partner with the private sector, we can get more investment into agriculture and forestry and benefit the climate at the same time.”

It’s estimated that currently, agriculture accounts for ten percent of emissions across the United States. However, Bonnie estimates agriculture and forestry could end up accounting for as much as 25 percent of the U.S. response to climate change in terms of emissions reductions if more farmers begin shifting their practices.

Professor Ray Weil estimates only around ten percent of U.S. farmers are utilizing cover crops. He says if climate-smart farming techniques gain ground, the impact will be significant, noting there are around 300 million acres of cropland in the country. “What happens on that huge amount of land will impact the whole earth,” said Weil.