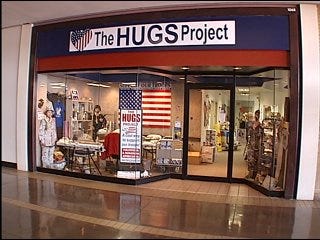 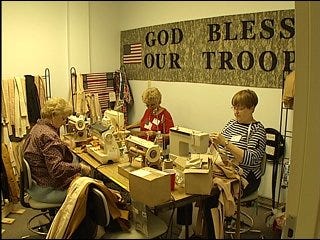 The men and women working in the HUGS Project headquarters are busy packing the extras, some comfort, for our men and women overseas.

But recently, HUGS Project coordinator Karen Stark received an e-mail from a soldier asking for those extras, and then some.

"He told us he's on a non-American base," Stark said. "They're having trouble getting supplies; things as simple as deodorant and ankle socks."

Springing into action, the Hugs Project piled up packages full of the necessities for those 80 troops in need, and then got back on the internet. They called for help from Hugs Project supporters around the United States. Supplies were sent. And then Karen heard back from the soldier again, with a story and pictures.

A few weeks after the exchange, a man came into the Hugs Project headquarters. It's the soldier's Father, who wanted to help the organization that was helping his son. He now volunteers each Wednesday.

"I've been helping here and there's people coming in all the time saying, ‘What can we do? How can we help?'" Johnson said.

And every volunteer in the organization feels that their time at The Hugs Project is a small price to pay for our liberty and freedom.