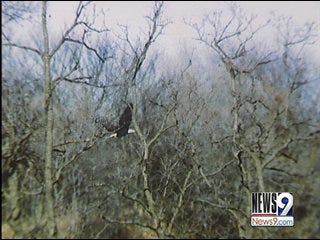 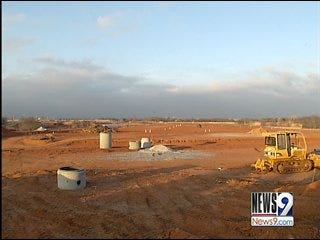 TULSA, Oklahoma - Several Bald Eagles have been spotted around Tulsa, but some are worried the bird's habitat may disappear. Developers are building new homes and in the process costing some wildlife their homes.

"It's just the most amazing thing you can see. You wouldn't think you'd see it like in Oklahoma City," Catherine Turoczi said.

Catherine's mother-in-law lives down the street from where many of the eagles have been spotted. They both want to save the Bald Eagles' homes that are being threatened by developers.

Although the Bald Eagle is no longer on the endangered species list, the bird is in danger of losing its habitat in Oklahoma.

"We just want to see his nest preserved. They tore down all his trees and we want to make sure they don't tear down his nest," Turoczi said.

Local eagle lovers have contacted the state's wildlife department, who put them in touch with a federal wildlife agent. The agent was not able to be reached, but the eagle's neighbors are willing to keep trying to help save the bird's home.

The Bald Eagle Protection Act makes it illegal to keep an eagle or even collect its feathers without a proper permit.