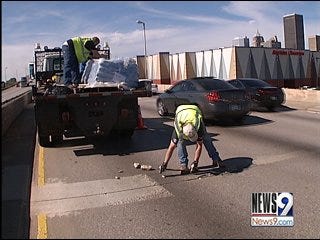 OKLAHOMA CITY - A group of supporting local rail passenger service is speaking out against the new Crosstown Expressway.

The group, On Trac, claims the new location of the downtown section of Interstate 40 ruins the city's chances of becoming a passenger rail hub.

"Virtually every major city in the sate comes to Oklahoma City by rail through the Union Station," said Charles Wesner, On Trac chairman. "We're getting ready to lose that connectivity."

When work is finished on the new interstate, Union Station will still be operational with a few tracks, but the large rail yard will be gone, said David Streb, engineering director for the Oklahoma Department of Transportation.

The location of the new interstate was selected 10 years ago.

"The fact that those folks may not have liked our decision, that's unfortunate, but I think it was a consensus-building decision," Streb said. "I think the right decision has been made."

On Trac proposes moving the 10-lane interstate about 300 feet to the south, infringing on the city's Latino community.

On Trac's Wesner said his group thinks ODOT has intentionally not maintaining the Crosstown expressway.

How safe are the bridges you cross daily?

"I think there has been an effort to frighten people about the safety of the Crosstown in order to push this along," Wesner said.

ODOT officials called the claims "absurd" and said the department spends about $1 million a year repairing the bridge.