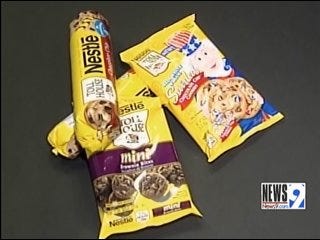 NEW YORK -- Nestle USA on Friday voluntarily recalled its Toll House refrigerated cookie dough products after a number of illnesses were reported by those who ate the dough raw.

The company said the Food and Drug Administration and the Centers for Disease Control are investigating reported E. coli illnesses that might be related eating the dough.

Oklahoma is included in the recall after the Oklahoma State Health Department confirmed one person in Tulsa County got sick from eating the cookie dough.

In a statement, the FDA said there have been 66 reports of illness across 28 states since March. About 25 people have been hospitalized, but no one has died. E. coli is a potentially deadly bacterium that can cause bloody diarrhea, dehydration and, in the most severe cases, kidney failure.

The FDA advised consumers to throw away any Nestle Toll House cookie dough products in their homes and asked retailers, restaurateurs and other foodservice operations not to sell or serve any of the products.

"This has been a very quickly moving situation," Nestle spokeswoman Roz O'Hearn said, adding the company took action within 24 hours of learning of the problem.

O'Hearn said the company will "cooperate fully" with the FDA's investigation.

It does not affect other Toll House products, including ice cream that contains Toll House raw cookie dough.

The FDA also said consumers should not try to cook the dough, even though eating cooked dough would be safe, because consumers might get bacteria on their hands and on counters and other cooking surfaces.

Nestle said about 300,000 cases of Nestle Toll House cookie dough are affected by the recall.

Long known to satisfy a certain longing of the brokenhearted and the children-at-heart, the cookie dough is nearly as popular raw as it is cooked. There are more than 40 raw cookie dough groups on Facebook -- one with more than 3,000 members -- complete with photos of dough and postings that read like love notes.

Several recent food recalls have been related to bacterial contamination, including a salmonella outbreak last winter traced to a peanut company that sickened more than 600 people and that was blamed for at least nine deaths. A separate outbreak of salmonella last year linked to jalapeno peppers from Mexico led 1,400 people to become ill.