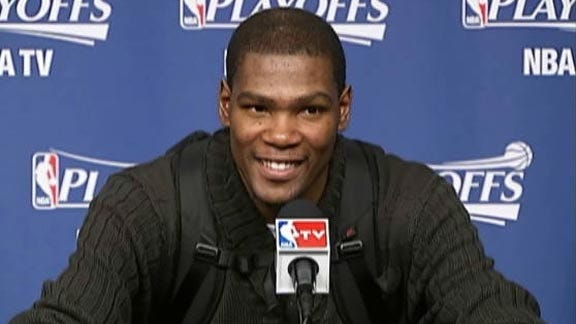 OKLAHOMA CITY -- People need to get off Kevin Durant's back. Could we ask for a better young man to be the leader of our NBA team, and a better representative of our city?

Last night, a camera crew from the electronic tabloid TMZ asked KD as he left an L.A. restaurant what there is to do in Oklahoma City. He casually tossed a "nothing" over his shoulder, seeming to just want to get away from the crew.

And now some people are saying he disrespected the city.

Folks don't get your feelings hurt.

Let me take you back exactly four days ago, when he posted this on Facebook and Twitter:

"Being in LA makes me love Oklahoma City so much more!! I love LA but just how quiet and low key Oklahoma city is fits me better...plus there's no traffic lol".

Three days before that, he posted this about his Gatorade commercial that aired constantly during the playoffs:

"I'm just happy I could do my part in helping put OKC and the Thunder on the map in a big time commercial!"

Now does that sound like a guy who's "dissing" Oklahoma City? And don't forget: This is the guy who could have left Oklahoma City for any city in the NBA, but signed to play here for as long a contract as he could get.

Take that all you OKC bashers out there.