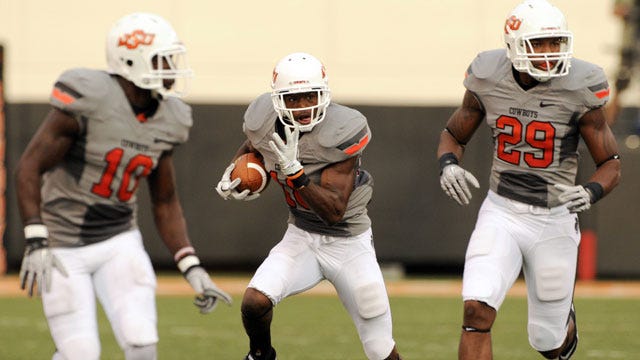 STILLWATER, Oklahoma -- Despite the new offensive system under new coordinator Todd Monken, the Oklahoma State offense picked up where it left off a season ago, knocking off the Louisiana Ragin' Cajuns 61-34 Saturday to open the season.

After their opening drive petered out in the red zone resulting in a field goal, Devin Hedgepeth intercepted Blaine Gautier and returned it 26 yards to the Louisiana 34-yard line. Sophomore running back Joseph Randle carried the ball four times in the Cowboys' next six plays, accounting for all 34 yards and the first touchdown of the season to take a 10-0 lead.

Then quarterback Brandon Weeden found his groove on Oklahoma State's next two drives.

OSU strung together a long drive, including seven consecutive completions by Weeden, capped off by a one-yard touchdown run by Jeremy Smith to put OSU on top 17-3. After a Louisiana three-and-out, Randle cracked off a long 23-yard run, followed by back-to-back completions by Weeden, the second a 15-yard touchdown pass to Josh Cooper to put Oklahoma State up 21 points.

After forcing yet another three-and-out, Weeden completed back-to-back passes to Justin Blackmon for a combined 34 yards to put the Cowboys on the Ragin' Cajuns' 12-yard line. Randle finished the drive off with two runs for 12 yards, giving OSU a 31-3 lead.

After trading punts, Oklahoma State got the ball back with 1:40 left on the clock. Weeden's pass to start the drive bounced off Josh Coopers' pads and was picked off by Bill Bentley, who returned it 38 yards for a score, cutting the gap to 31-10.

Louisiana Lafayette saw a promising drive end in a field goal cutting the lead to 37-13 five minutes later, but the ensuing kick ended up out of bounds, giving the Cowboys the ball on their 40-yard line.

Weeden connected with Justin Horton for a 56-yard pass to take it down to the Ragin' Cajuns' four-yard line, but a chop block on the next play pushed them back to the 19. But Weeden hooked up with Tracy Moore on the next play for a score, giving OSU a 44-13 lead.

The Cowboys forced a three-and-out on the next drive, but Weeden threw yet another interception, this one returned 50 yards for a score, his second pick-six and third interception overall on the night, pulling Louisiana within 24 points.

The starters sat for the most of the fourth quarter, with Oklahoma State leading comfortably.

Weeden finished the game with 388 yards and three scores, completing 24 of his 39 pass attempts, while Randle rushed 22 times for 129 yards and two scores. Blackmon came away with eight receptions and 144 yards, but didn't score, ending his NCAA record of 12-consecutive games with a touchdown.

The Cowboys now face a short week, with a Thursday night matchup at against the Arizona Wildcats, kicking off at 7 p.m.