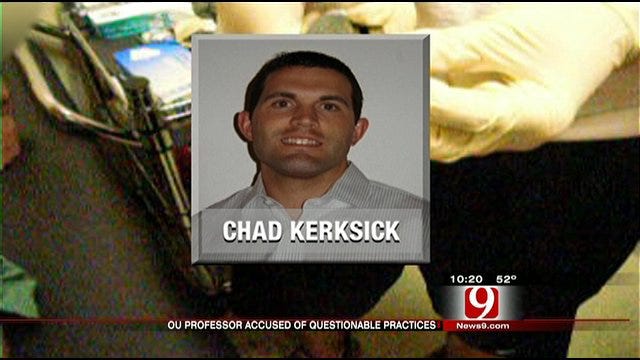 OKLAHOMA CITY -- Using students as guinea pigs and making deals with companies to make money off his research. These are serious allegations against an OU professor.

A former teaching assistant is speaking out about the questionable experiments. This graduate student and several others went to the university to report what they say are questionable practices.

Now that professor is on a leave of absence, and another professor has left the university as well. And we must warn you, some of the video and pictures in this story are graphic.

"In November we started smelling something fishy going around," the suspicious student said.

This graduate student asked us to protect his identity. But he wanted to expose what he says one of his professors was doing to him and other students.

"There's a lot of people who got hurt as a result of his actions which could have easily been avoided," the student said.

The graduate student gave us some videos, which show some of the procedures performed on his teaching assistants, and other student volunteers. Many times these procedures were painful and sometimes led to internal bleeding and awful bruises.

Besides the injuries, many students were told to keep certain research practices secret.

And this student said sometimes, results were even altered by the professor, who was allegedly getting payments from companies for his research, while on the university dime.

Reporter: "Did the university know he was doing these procedures?"

Student: "Yes, but the thing is he told them we were doing this in a sterile environment, using sterile equipment, sterile gloves, taking all the precautions needed and they trusted him."

But this whistle blower said he betrayed that trust.

"In the videos you could see that, like this video's not going anywhere. Don't say anything to anyone about this. I'll deny deny deny, I mean that was his main motto," the student said.

The Professor in question is named Chad Kerksick. An OU Spokesperson confirms that Kerksick was hired as an Assistant Professor for the Department of Health and Exercise Science in August of 2006. He is currently on a leave of absence without pay, but she would not say why, citing it was a personnel matter.

News 9 was given some documents which confirmed the university did launch an investigation into the allegations against Kerksick and terminated his research. We went to Kerksick's Norman home, but he was not there. And repeated calls to him went unanswered.

The student that endured this just wants to make sure Kerksick's activities are known.

We've learned another professor who worked with Kerksick on a lot of this research just moved to Florida. The university is not commenting on his departure either.

We've also learned a complaint has been filed with the FDA and a special investigator has been assigned to look into the accusations.