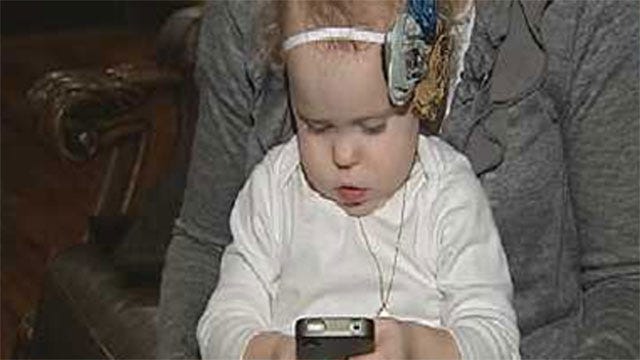 The Terrible Twos has a new meaning. How about the "techy" toddlers? One Oklahoma City couple told News 9 their 20-month old cost them $200 by downloading apps.

These are actually in- apps, colorful games not made by Apple, but by sub-contractors or developers. Some are free, others cost big bucks and with the click of a button, you can go broke.

London won't celebrate her second birthday until April, but if you didn't know any better, you would think she was older and her last name is Jobs, not Hall. This technology-savvy tot doesn't play with dolls, but with apps.

"Apple says that you can report a problem with an app, but with any in-apps you have to go straight to the developer," Holly Hall, London's mother said.

The Frisbe Forever developer is based in Denmark. With two tiny thumb clicks at $99.99 a pop, London stuck her parents with a hefty bill.

"I just stood there with my mouth open, I didn't know whether to laugh or cry," Mrs. Hall said. Her husband agrees.

"You have to be impressed with her ability to problem solve, but ultimately you kind of feel suckered a little bit. I mean, we got outsmarted by a 20-month old," Jeff Hall said.

A Facebook friend helped them with password protection and the Hall's have come up with a few ground rules for the kids, but warn other parents the in-apps are designed to lure children and don't need anything more than an Apple ID to charge your account.

Luckily, the Halls have a friend at Apple who helped them remove the charges as a one-time courtesy.