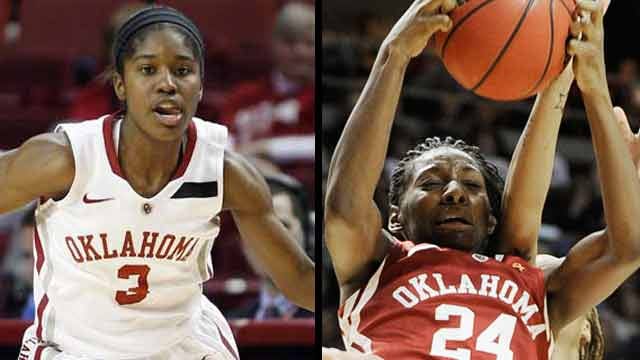 Ellenberg continued her stellar offensive output for the Sooners as their leading score against Kansas State and Texas with an average of 24.5 points, 4.5 rebounds and 5.5 steals.

She was a big part of OU's upset of Kansas State as she hit her first seven shots, including five three-pointers. The honor is the fourth of its kind for Ellenberg, the first for this season.

Ellenberg shot 47.3 percent from the field and 72.7 percent from three point range this week and is now fifth on the Sooners career 3-point charts with 145 made in just 52 games.

Campbell, a native of Spencer, Okla., came off the bench against Texas to help the Sooners with three made 3-pointers in the first half.

The freshman averaged eight points and four rebounds on the week for her second career conference honor.

Against Texas, Campbell finished with 15 points and five rebounds along with an assist, a block and a steal.

Texas' Nneka Enemkpali is the other co-freshman of the week after she averaged 7.5 points, five rebounds and two blocks on the week.