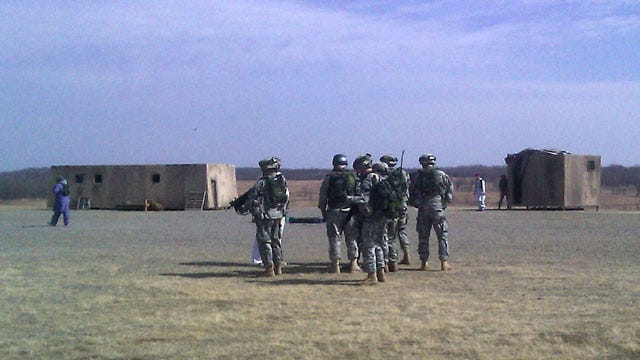 A farewell ceremony will be held on Sunday for more than 40 Oklahoma Army National Guard soldiers who will be deployed to Afghanistan later this year.

The ceremony will be held at 10 a.m. Sunday at the Army Aviation Support Facility in Lexington, Oklahoma, for more than 40 members of Detachment 1, Company C, 2-149th General Aviation Support Battalion.

According to officials, the soldiers will be leaving the state for Fort Hood, Texas, where they will receive additional mobilization training before being deployed to Afghanistan later this year.

Officials say the soldiers fly the UH-60 Blackhawk helicopter and will be conducting aerial medical evacuation missions while in Afghanistan. Their deployment is expected to last approximately nine months.

"Every deployment is a new experience," said Capt. Christopher Lackey, 2-149th commander. "But our Soldiers have some experience outside the medical evacuation field that I believe will be valuable for this deployment.

According to Lackey, a large percentage of his unit members have previous deployment experience to places like Iraq, Afghanistan and Kosovo and have been training on a number of different scenarios leading up to this deployment.

"We're looking forward to the deployment," Lackey said. "It's going to be a very noble mission. We're going to be helping the general populace as well as our allies."

The public is invited to attend the ceremony.