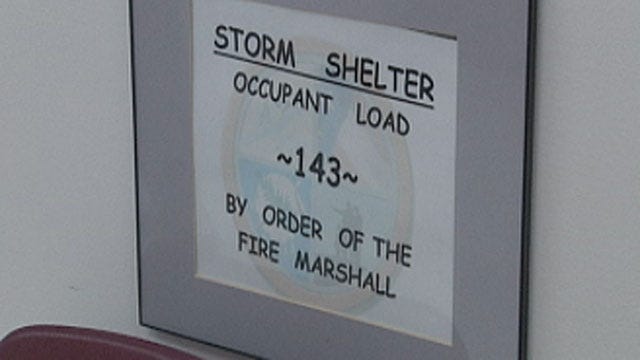 With the start of tornado season just a few months away, Midwest City leaders are saying no to public tornado shelters. You will no longer be allowed to take cover at the Reed Center or the city's other two shelter locations.

The Midwest City Council has been talking about closing what were the last operating public storm shelters in the metro for quite some time. The last major storm to hit parts of Midwest City was in 2011, and the city's three shelters were packed to capacity.

For many Oklahomans, May 3, 1999, is a day that will forever be etched in their memories. An F-5 tornado swept across a 38-mile path, from Chickasha through south Oklahoma City.

"They can't look out for you cradle to grave, but it's nice to have a place to go when you really need it," BJ Anderson told News 9 during an April 2012 interview.

Anderson is one of thousands of residents who has relied on the city's community storm shelters, especially when the storm season is at its peak.

Now, after a recent Midwest City council vote, those safe havens for residents are no longer an option. City leaders say it's not a liability issue; it's a safety issue.

"It becomes a safety issue when you have too many people in one place too, and then what do you do," asked Assistant City Manager Tim Rundel. "You start turning away others that are trying to get into the shelter. Who do you turn away, and who do you let in?"

"We have someone in our neighborhood that has a storm shelter, so we've been able to go if there's ever been a problem. He allows us to go to his house," resident Farah Stout said.

"Sometimes it's best to find a safe place right where you're at," said resident James Bookman.

We're told residents are installing their own shelters regardless of the FEMA assistance. So far, nearly 1,500 private storm shelters are already registered in Midwest City.

Midwest City's three shelters had a total capacity of a little more than 1,300 people. The largest shelter was the Reed center.