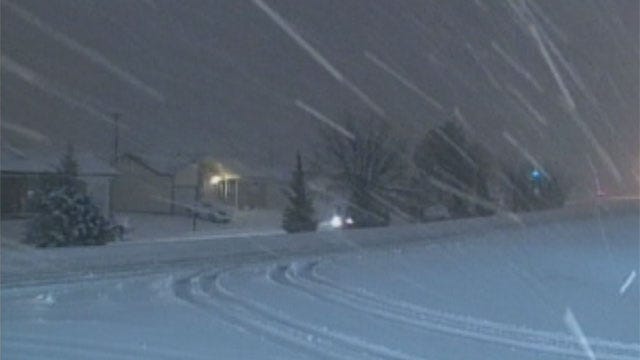 Some schools in western and northwestern Oklahoma have already pulled the plug on classes Monday. In the metro, school officials are holding off, but are monitoring the forecast closely.

News 9 was at Edmond North, Sunday night, where a lot of students drive several miles to go to school every day. On Monday morning they will be fine, but the afternoon drive is what has school officials all over the Metro concerned.

Winter weather already hit the metro area last week, and the forecast for this storm is worse. Edmond Public Schools say it will have school tomorrow, with the hope that they will not have to send students home early. They say they don't like to do that.

Instead, they do have crews on standby to clear sidewalks. They also have trucks that can do some sanding of the roads, but right now, school administrators think people will be back home from school before there is a serious problem on the road.

"The easy call is where you have eight inches of snow. That's the easy call. When you have these marginal events, it's always a difficult call. But we are hoping to be able to have class and keep safety in mind," said associate superintendent, Bret Towne.

News 9 spoke with OKC Superintendent Karl Springer who says OKC Public School will make the call on class no later than 5:30 a.m. They don't send kids home early, so for them it's all or nothing.