Countdown To The Playoffs 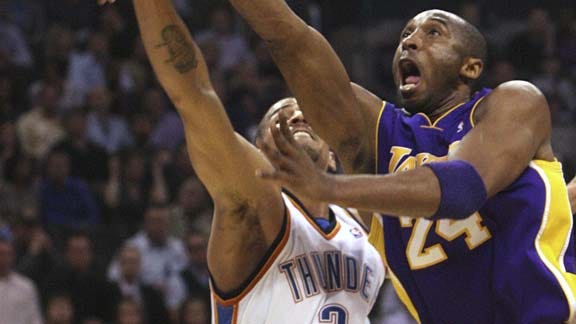 Pretty much everyone in the Western Conference playoff race is playing good basketball. The Thunder appears to have its momentum back, while the Grizzlies refuse to lose and the Lakers are rapidly closing in on the No. 8 seed.

Every Monday, we'll have an updated look at who's doing what as we count down to the playoffs. Here's what's coming up this week in the Western Conference.

San Antonio opened the second half with four road games in one week, and fared quite well. Their reward: three home games against three of the worst teams in the league. 3-0 this week is the surest bet you'll ever make.

This week: vs. Hornets | @Nuggets | @Clippers

After blowing a late lead to James Harden & Co. to begin the week, OKC responded with a bang. They wiped the Wolves and Bulls off the court, and appear to have regained some momentum. This week starts easy with a home matchup against New Orleans, but trips to face the Nuggets and Clippers are brutal. 2-1 would do just fine for the Thunder.

LA's current better half split its home games with the Spurs and Jazz last week, and now faces a busy stretch. A trip to Indiana and a home date with OKC will be really tough, but their pain should be alleviated by games against the pitiful Bobcats and Cavs. With OKC's tough week ahead, this might be a chance to make up some ground in the race for the No. 2 seed.

Rudy who? Despite the Rudy Gay trade, Memphis has won seven straight and has its eyes on the No. 3 seed. The Grizz has two very winnable games this week, but in-between must travel to Miami. 2-1 this week would get it done, but don't count them out against the red-hot Heat.

This week: vs. Lakers | @Portland | vs. Thunder

It should have been a 3-0 week for Denver, but a terrible loss at Washington is just the latest example of this team's road ineptitude. The Nuggets avoided complete disaster by winning in Charlotte, but now face a tough week ahead. Home games against the Lakers and Thunder will be tough, and even a trip to slumping Portland will likely give Denver major problems.

What an impressive week for Golden State. The Warriors snapped a six-game skid by defeating the Suns, Spurs and Wolves this week, regaining their hold on the No. 6 spot in the West. For a moment, it looked like they were going to play themselves right out of the playoff picture. Their sudden turnaround came at just the right time, as this week they head east for tough games against Indy, New York and Boston. A 2-2 week would be perfectly okay.

This week: vs. Boston | vs. Atlanta | vs. Charlotte

With the Rockets and Lakers both playing well, it would behoove Utah to take care of business at home this week. The Jazz plays well at home and 3-0 this week shouldn't be that difficult. If that happens and Golden State slips on the road, Utah might find itself in the sixth spot come next week.

The Rockets had a golden opportunity to make this a perfect week, but blew a seven-point fourth-quarter lead to lose at Washington. However, wins over the Thunder and Nets were impressive and Houston has a pretty easy week ahead. The Rockets have to keep their foot on the gas as the Lakers creep closer and closer in the rear-view mirror.

After spending most of the season providing the NBA community with one easy joke after another, the Lakers might be getting things together. The death of iconic owner Dr. Jerry Buss sent shockwaves throughout the organization and the city, and it might just have been the reality check the Lakers needed to get it together. A trip to Denver to start the week will be a brutal test for LA, but home games with the Wolves and Hawks should both be wins.

This week: vs. Nuggets vs. Wolves

The Blazers finally snapped a seven-game losing streak by beating Boston on Sunday. Portland needs to get hot if it wants to get back into the top-eight, and two home games this week might get things started.

2-1 sounds like a good week, but all the Mavs will remember was Sunday's heartbreaking loss to the Lakers. If Dallas is going to try and catch Houston for the No. 8 seed, it's going to need to put together a decent-sized winning streak. A trip to Houston late this week will be a must-win.

Erick Payne An NFL star from Tulsa is once again making a difference in his hometown.
View More Stories

Park Project Pushed Back As Coweta Community Hopes For Change

Kristen Weaver Neighbors in Coweta are getting together in the hope of getting a park some desperately needed improvements.

News On 6 The Tulsa Public Schools Board of Education voted Tuesday night to extend the contract for Superintendent Dr. Deborah Gist until 2024.
View More Stories