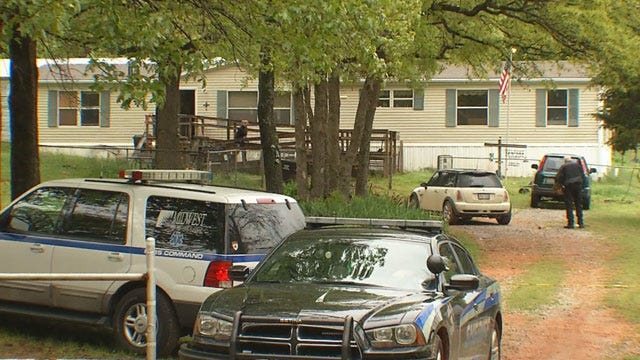 A gunman dressed in full tactical gear opened fire on his family at a home in Luther, Okla. Thursday afternoon.

The 24-year old suspect is in custody. His mother is dead and his stepfather injured. Police say the suspect, his mother and stepfather were all armed when the gunfight broke out.

"My father and my stepmother have been shot," said Sara Phillips, the suspect's stepsister.

Dozens of bullet holes cover the front of the trailer home. When deputies arrived to the scene at about 3:00 p.m. Thursday, the suspect, 24-year-old Matthew Strickland was sitting in a car suited up in tactical protective gear.

According to the Oklahoma County Sheriff's office, the deputy took Strickland into custody at gunpoint then found his mother and stepfather shot inside their trailer.

"When I did speak to my father he said he had been shot three times, and he [knew] for sure that my stepmother has been shot in the head," said Phillips.

5/2/2013 Related Story: One Dead, Suspect In Custody After Shootout In Luther

"This is a wide-range crime scene. There are casings several feet both inside the house and outside the house," said Mark Myers, Oklahoma County Sheriff's Dept.

And that is why investigators says it'll be quite some time before they're able to piece everything together and determine what led to the gun battle.

"It's been an ongoing conflict between them," said Philips.

Strickland's stepsister says an argument may have begun after the mother and stepfather learned the suspect was kicked out the military.

Police say Strickland was hit by bullets, but was not seriously injured because he was wearing that protective gear. Strickland apparently went to visit his mother and stepfather when the altercation began. Police say he did not live with his mother.

Strickland is in the Oklahoma County jail on a complaint of first-degree murder and shooting with intent to kill. Detectives are still attempting to speak with the suspect's stepfather at the hospital. The investigation is ongoing.