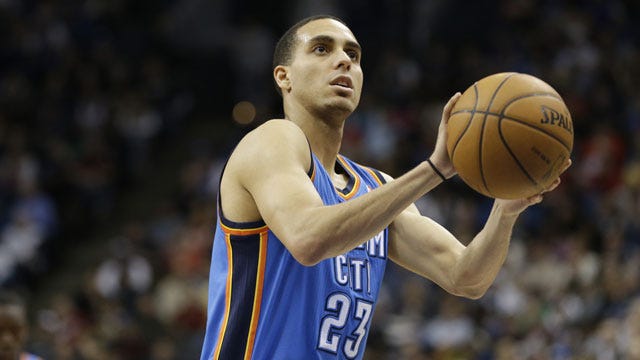 For many people, July 1 means it's time to finalize their Independence Day plans. But if you're an NBA GM, it marks the start of the most exciting time of the year: free agency.

For cash-strapped teams like the Thunder, there is no room for error. When there's only room for one or two cheap players, you better choose wisely. Oklahoma City's options are certainly limited and in order to pick up an impact-player GM Sam Presti is going to have to get creative.

There are a couple different routes Presti could take, but the recent reports regarding OKC's pursuit of former Heat and Warriors' wing Dorell Wright gives a good indication of where his mind is. Wright is a solid 3-point shooter (37 percent-career) that can bring athleticism, energy and offense to the Thunder's second unit.

If signing a cheap free agent wing is the route Presti & Co. wants to take, Wright certainly isn't the only option out there. Other FAs OKC might be able to snag for cheap: Carlos Delfino, Wayne Ellington, Matt Barnes, Reggie Williams, Marco Belinelli and Anthony Morrow.

But here's the part where signing those guys becomes a little too good to be true: the Thunder's salary cap situation is in a tighter jam than Aaron Hernandez.

To be exact, even if OKC doesn't re-sign DeAndre Liggins or bring Derek Fisher back for part of next season, its salaries would equal roughly $68.77 million – just $2.83 million under the $71.6 mil luxury tax threshold.

So assuming the Thunder brass' philosophy hasn't changed and they still want to avoid entering the tax, there aren't many options. Regardless of whom they sign, it will have to be with a salary cap exception, because the Thunder is already operating over the cap.

One option is to re-sign Kevin Martin, but the odds of this occurring are extremely low. Martin was okay last season but his production wasn't anywhere near the salary he'll be looking for in the open market. But if OKC were to pursue this, the Larry Bird cap exception would allow them to try and work something out. Obviously though, re-signing Martin would mean entering the luxury tax by a decent amount.

Another option is to use a mid-level cap exception to sign a targeted free agent. The MLE allows teams that are operating over the cap to sign a player to a $5 million salary for four years. This would also put the Thunder into the luxury tax, but not very far. OKC will surely consider this option, but only for someone it deems as a solid long-term investment.

The third option is to try and configure a trade. OKC could try to find a suitor for a sign-and-trade with Martin, with the thought being to get value back for Martin instead of letting him walk for nothing. That scenario is somewhat unlikely though as teams will already be hesitant to pay Martin the high salary he'll be asking, much less give up pieces in a deal for him.

The other trade option is to go after a guy on the trade block. The first few days of free agency is the time where a handful of teams are cutting every player they can find in hopes of clearing cap space to pursue a star. For instance, reports from New Orleans say the Pelicans are looking to move Robin Lopez so they can afford to pay Tyreke Evans. Lopez makes around $5 mil next season and the Thunder might have enough pieces to make that deal work. Lopez might not be a star, but is long, athletic and would be an upgrade at the center position for OKC.

With all that said, the most likely scenario is the aforementioned bargain hunting. The Thunder will look to use the minimum salary exception to try and convince a free agent to take a paycut in order to chase a title. The minimum salary exception means that even though OKC is already operating over the cap, it can offer the league minimum to a free agent for up to two seasons. For example, the veteran's minimum for a nine-year veteran like Wright is $1.23 million per season, so that's what the Thunder could offer.

There are a lot of directions Presti can take, but most include entering the tax or having a player sign for less than he's worth.