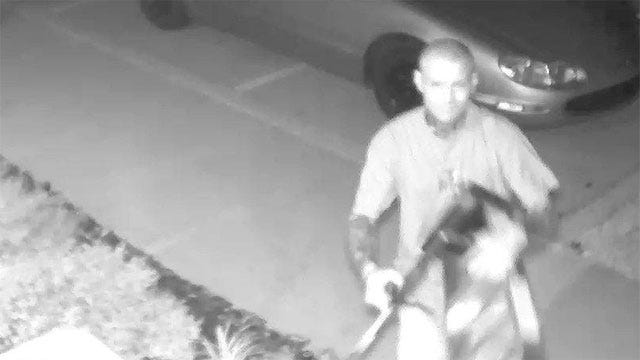 A security camera recorded video of a man just before he stole the camera and broke into a dentist's office in southwest Oklahoma City.

On June 23 around 3:15 a.m., the burglary alarm sounded at the office on S.W. 119th Street near Western. When police arrived, they found a window at the business had been broken out.

Police later reviewed security camera footage and observed a four-door, tan or gold Chrysler with shiny black rims pull up to the business. Three people, two women and one man, were inside the vehicle.

The video – which was taken around 10:30 p.m. the previous night -- shows the driver exit the car, open the trunk and pull out a hammer. Just before the footage ends, it shows the man walking toward the camera and prying it off the building. It's believed that's when the building was burglarized.

The man had a "sleeve" of tattoos on his arm and was wearing either khaki shorts or jean shorts, with a West Coast black t-shirt.

Police have released a picture of the suspect. They are asking the public to take a close look at the picture. Anyone who recognizes the man should call Crime Stoppers at (405) 235-7300.