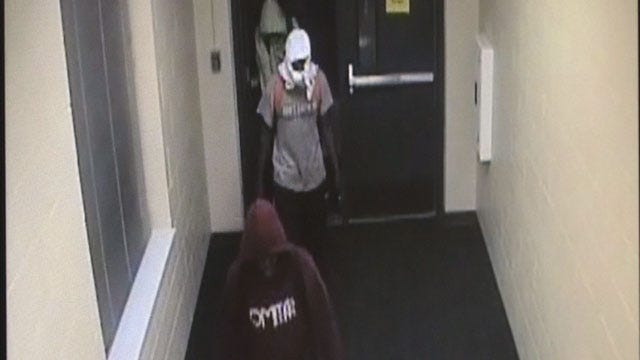 New surveillance video is released of a break-in at an Oklahoma City elementary school. It's a story News 9 broke last week.

Bodine Elementar School near S.E. 55th and Bryant Ave. has been hit six times in less than three weeks.

The windows are still boarded up, and the cleanup and repairs continue inside. And everyone here from the parents to teachers to neighbors just want the people responsible caught.

Police released the surveillance video of the break-in earlier on Friday. One of the vandals was caught walking by a camera during the July 15 break-in.

Authorities got a better look from a couple of weeks ago that shows a total of three young men in distinctive hoodies making their way in.

"It needs to be stopped," said Alicia Cannady, who has a daughter who attends Bodine elementary. She lives right across the street, and is tired of her daughter's school getting vandalized. "My daughter is getting ready to go to school right now, and I don't even know if all the repairs are done yet. That's just taking away from her education, so it is really ridiculous."

"What these vandals are doing is stealing from the pockets of the students," Jackson said.

He says these vandals have caused more than $25,000 worth of damage to windows, lights and classrooms. They even emptied all the fire extinguishers all over the school.

"It took hours and hours of manpower to cleanup all that mess," said Jackson. "Someone has to step up with some fortitude and say enough you're hurting my school."

The neighborhood watch is also trying to raise some money, to encourage someone to come forward.

Despite all the damage, school is scheduled to start here on schedule on August 5.