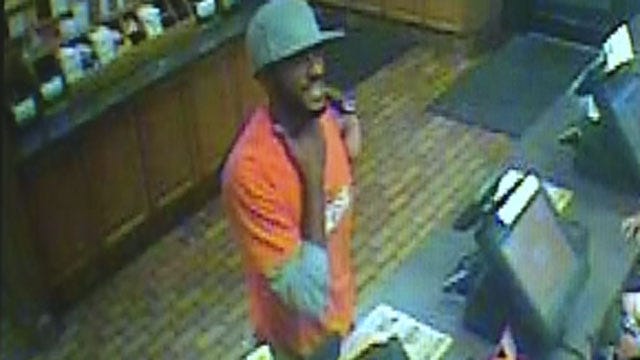 Police are trying to identify a man who is accused of robbing a southwest Oklahoma City Whataburger early Friday morning.

According to police, at about 3 a.m. Friday, a man walked into the Whataburger, located at 1325 S. Meridian in Oklahoma City, and ordered food.

The man reportedly then walked behind the counter with his hand in a duffel bag, pointing it towards the two employees, and said "you know what it is. You know what the drill is. Let's go to the office where the safe is."

The suspect then told the employees to open the safe and the cash registers.

The victim said she did see a gun in a duffel bag the suspect was holding, but she said the suspect never pulled it out.

The man then forced the victims into a freezer. After filling a bag with money, he took off on foot.

The suspect is described as a man in his mid-20s, who stands 5 feet 8 inches tall and weighs 180 pounds. He had short curly hair, and was wearing an orange OSU blood drive t-shirt and black pants.

Just two hours before this robbery, someone attempted to rob another Whataburger, located in the 1100 block of S.W. 59th, between Blackwelder and Western.

That suspect ended up running away from the scene. No arrests have been made in that robbery.