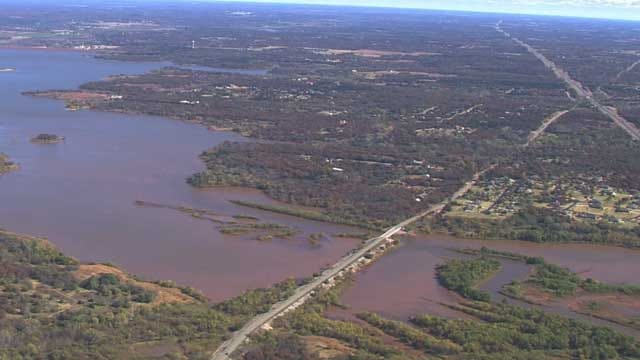 Oklahoma's 4-year-long earthquake swarm suddenly has more people talking. That is likely due to the fact that the most recent burst of seismic activity has been shaking homes and rattling nerves in northeast Oklahoma City, an area far more densely populated that other areas that have been hit.

But the quakes also have Oklahoma's top earthquake researcher talking about a unique possible cause.

This latest mini-swarm of earthquakes has been packed tightly in an area just south of Arcadia Lake, and it seems they could be tied to the lake itself.

Geologists in the Corporation Commission's oil and gas division have been busy gathering data the last several days and send it off to the Oklahoma Geological Survey, as they do in the wake of most seismic events.

Typically, they put together information on nearby wells -- injection wells or just oil and gas producing wells -- and this case has been no different. Preliminary data shows a number of active disposal wells in the vicinity of the earthquakes, but none right on top of them.

"I think with the latest slate of earthquakes," said Corporation Commissioner Dana Murphy, "there really weren't any disposal wells any closer than, I think, six miles."

At the Oklahoma Geological Survey, research seismologist Austin Holland says the earthquakes are just too far from any active wells.

"And so there's no reason at this point to think [the earthquakes] are induced," Holland said, in a phone conversation this afternoon.

But the Corporation Commission also passed along data on lake levels at Arcadia -- data that certain got Holland's attention.

Normal water volume at Arcadia Lake is about 30,000 acre feet, but last June it spiked to 57,000 acre feet -- almost double the volume, and thus also the weight.

A graphic produced by the Corporation Commission shows a spiking water level in red, and the recent spike in seismic activity in blue, and they mirror each other almost exactly.

Holland says there are known cases of seismicity being caused by the filling or draining of nearby reservoirs, and that could be the case here.

"There's oftentimes quite long delays," Holland explained, "three to six months between filling of reservoirs or large rainfall events, and these earthquakes that potentially get tied to those events."

Holland says there are couple of ways that Arcadia could have triggered the quakes. The sheer weight of the water this summer, or the sudden decrease in weight, as water was released. Either could have impacted a sub-surface that is already under stress.

He says he'll need more time and data, however, before he can draw any conclusions.