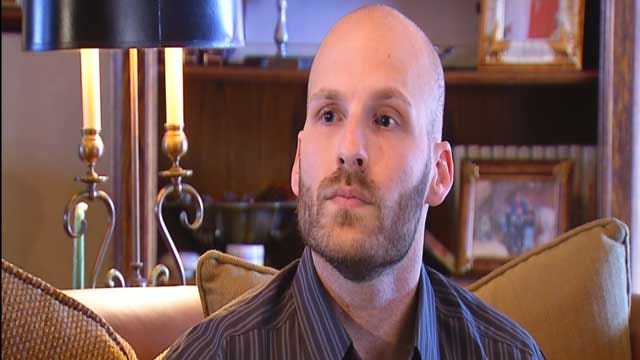 A former Army Lieutenant, convicted of a war crime, tries to get back to civilian life after serving five years in a military prison.

Michael Behenna was released from Fort Leavenworth a week and a half ago. News 9's Chris McKinnon sat down with Behenna for his first TV interview.

Behenna was convicted of unpremeditated murder in a combat zone for killing a known member of al-Qaeda during questioning. In our candid conversation, Behenna opens up about that day.

"I am remorseful," said Behenna. "I look at Monsur like he's a human being, but sometimes those things happen the combat zone or war. Things you can't take back."

Behenna said he was field-questioning Ali Monsur about an attack on his platoon and al-Qaeda's operations when Monsur came at him.

"He throws a piece of concrete and it hits right by my head, and by the time I turned around to look, he stood up," recalled Behenna. "He stood up like he's coming at me, so I'm thinking he's gonna take my weapon or and use it on me, so I instinctively shoot and I shot twice."

The incident landed Behenna behind bars at Fort Leavenworth despite Behenna's claim he acted in self-defense. After serving five years, he is out on parole and trying to get things back to normal.

"This week, it's been just me and it's been nice just going outside, enjoying the weather," Behenna said.

Behenna said his situation and others' are misunderstood in the civilian world.

"In prison you have guys that are career criminals and guys that have robbed somebody, killed somebody in the civilian world, in the United States," said Behenna. "Then you have those war criminals that were put in tough situation over in Iraq and Afghanistan that made split-second choices, decisions and they were prosecuted for it. Those guys are… they're war criminals just like… they're just like me. They're good people."

But those guys don't all have the support Behenna had, and he said that's what got him through this, especially the support from his parents.

"I've been trying to thank them, and it's a…it's tough to do," said Behenna. "I get emotional when I think about it and everything that they've done.

Behenna said his next move will be getting a job.