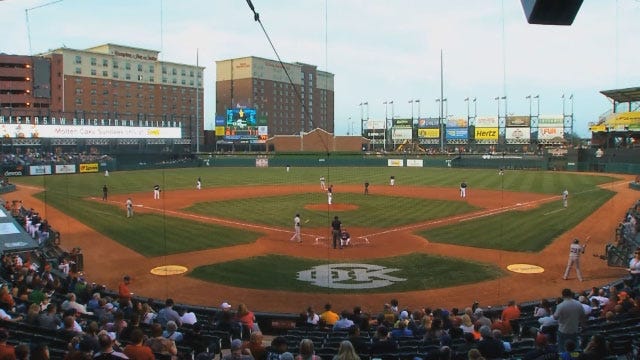 The Iowa Cubs built an early five-run lead, then tacked on five more runs in the top of the eighth inning of a 10-2 win against the Oklahoma City RedHawks Sunday in front of a crowd of 4,322 at Chickasaw Bricktown Ballpark.

Iowa held the RedHawks (62-61) to their lowest run total of the month, as Sunday marked the first time in August Oklahoma City recorded fewer than five runs in a game.

The win allowed the I-Cubs (65-58) to knot up the current five-game series, 2-2, and extend their lead over the RedHawks to three games in the American Northern Division standings.

The 10 runs scored by Iowa were the most allowed by the RedHawks since an 11-9 loss at Round Rock July 21.

The I-Cubs built a 4-0 lead in the first inning. Jorge Soler doubled on a fly ball to center field to drive in two runs. Mike Olt followed with a two-run homer that ricocheted off the LED board in left field to put Iowa ahead, 4-0.

Elliot Soto led off the second inning with homer into the left field bleachers to put the I-Cubs in front, 5-0. He went on to finish the game 3-for-4 with two RBI.

In the bottom of the fourth inning, and with runners at first and second, Preston Tucker connected on a RBI single to bring home the first run of the night for the RedHawks and cut the Iowa lead to 5-1. In the seventh, a RBI single by Max Stassi pulled the RedHawks within three runs.

Iowa went on to add five more runs in the top of the eighth inning.

A RBI single by Kris Bryant put the I-Cubs ahead by four runs. The I-Cubs then loaded the bases with none out in the top of the eighth inning with a single and back-to-back walks. After Josh Vitters popped out, Rafael Lopez hit a RBI single to right field, and a second run scored on the play on a throwing error by Andrew Aplin to give Iowa an 8-2 advantage.

Astros outfielder Dexter Fowler continued his rehab assignment Sunday and played his third game with the RedHawks. He started Sunday's game in center field and went 0-for-2 before exiting the game in the sixth inning.

Oklahoma City pitcher Asher Wojciechowski (2-4) allowed five runs and six hits over the first two innings, but went on to retire the final 11 batters he faced. He walked two and struck out five in the loss.

Eric Jokisch (9-8) recorded the win on the mound for Iowa, allowing two runs and nine hits over 6.2 innings. Alberto Cabrera earned his second save of the season.

The RedHawks wrap up their five-game series against the Iowa Cubs at 7:05 p.m. Monday at Chickasaw Bricktown Ballpark.