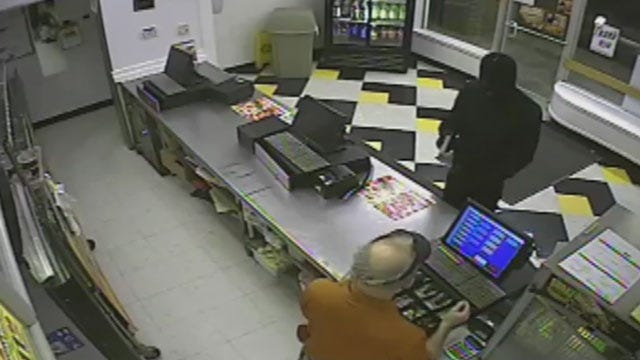 An armed robbery was caught on camera. The scary scene played out at a Little Caesar's near Hefner Parkway and Pennsylvania Avenue.

The surveillance video showed a clear shot of the gunman aiming right at the cashier. Imagine being at work when all of a sudden someone flies through the front door with a gun pointed right at your face. That was real life for the man behind the pizza counter. He seemed to remain calm about it, giving in to the demands of the gunman who yelled out "give me everything in the drawer."

He opened the register, and then one by one grabbed each pile of cash from the register and placed them into a bag. He then handed the suspect the money. The gunman grabbed it and sprinted out.

The entire ordeal lasted a total of 67 seconds. That was how long it took for the gunman to walk into frame of the outside security camera, walk inside the Little Caesar's, rob the place and then take off running once he got back outside the business.

Nobody inside the store could really talk about the ordeal. They said it's against company policy.

“We can't give out any information,” one worker said. “We just work. That's it.”