Westbrook Drops 45 On Pelicans As Thunder Creeps Closer To Playoffs 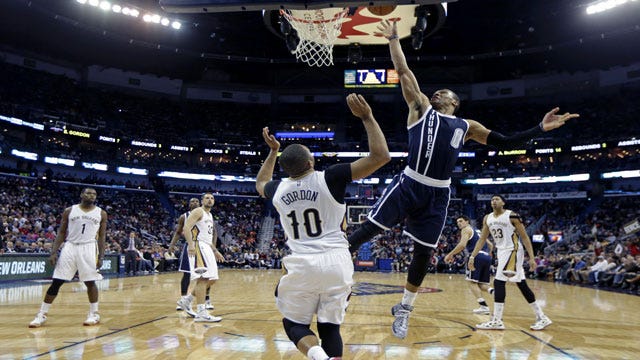 That was the case on Wednesday night in New Orleans, where Oklahoma City, sans Kevin Durant, earned a much-needed 102-91 road win thanks to Westbrook matching his career high.

Westbrook carried the Thunder throughout the half but OKC's defense wasn't up to par. New Orleans took a 57-51 into the break and extended it further in the third. Tyreke Evans' layup with 8:56 to go in the third put New Orleans up 66-55 and it looked like the Pelicans were going to run away from the shorthanded Thunder.

But after a scoreless first half, Serge Ibaka woke up and helped Westbrook lead the Thunder back. Ibaka and Westbrook scored OKC's next 16 points and the Thunder took a 77-76 lead into the final period.

From there it was back-and-forth until the Thunder flexed their muscles in the final four minutes. In a game with 20 lead changes, it was all Oklahoma City when it mattered the most.

Oklahoma City closed the game on a 13-0 run thanks to Westbrook and Dion Waiters. With a 94-91 lead and just 3:34 to go, Waiters stole the ball from Evans and sprinted down the court for the easy layup. He followed that up with an eight-footer and just like that, OKC had it in the bag.

The Thunder got a whopping 66 points in the paint, which matches an OKC-era record for a regulation game. Steven Adams and Kendrick Perkins combined for 14 points and gave the Thunder a nice scoring lift on the interior.

Anthony Morrow played a big game off the bench with 14 points on 6-of-11 shooting. Morrow also drained two huge 3-pointers in the second half. Ibaka finished with 13 points, six boards and six blocks. Waiters chipped in 12 points and six boards as he started once again for Durant.

But the story was Westbrook's dominance. The often mercurial, occasional chuck-happy point guard shot an efficient 18-of-31, grabbed six rebounds and dished out six assists. He put OKC on his back in one of the most important games of the season.

The win vaults the Thunder (25-24) back above the .500 mark and within one game of the Pelicans (26-23) for the No. 9 spot in the West. OKC can close the gap completely when it hosts New Orleans on Friday night at Chesapeake Arena, but Brooks emphasized that catching the Pelicans isn't his team's current focal point.

“I'm not oblivious to who's in front of us, but there's still quite a bit of basketball left,” Brooks emphasized. “You can't focus on the playoffs right now.”

Westbrook Drops 45 On Pelicans As Thunder Creeps Closer To Playoffs